This morning a blogger I follow (Katie Bradshaw, who writes at SCB Citizen http://scbcitizen.wordpress.com/ ) posted some pictures of turkey vultures soaring over her neighborhood in Scottsbluff. Along with the impressive pictures she wrote about the ecological value of carrion feeders and pointed out that although many of us look at "ugly" vultures and think "yuck," we need only think a bit more about what they do for us to gain at least a grudging appreciation for their existence.

Here is a story about and some pictures of a unique turkey vulture I "met" during the summer of 2009. The bird unknowingly shared with me a good lesson in living life with adversity. As I'm experiencing some adversity myself just now, I was pleased that Katie's post reminded me of my brief acquaintance with a tough old bird, and the perseverance it demonstrated. Click on the images for a larger view.

At 9 p.m. there was still a warm glow in the western sky though the sun had long since set and full darkness was only minutes away. Speeding east along the county road, a farm truck loaded with freshly harvested wheat was making the day’s last run to the elevator. The big GMC truck had only one headlight – a dim, weak headlight at that – and the driver was moving fast, trying to complete the trip while some twilight remained.

Ahead of the speeding truck a young fox bounded through tall ditch weeds and up onto the road. Startled by the sudden appearance and noise of the truck, the fox paused and stared into the single dim headlight, then turned to scamper out of the way. Too late. The truck driver barely noticed the thud as he ran over the fox, leaving a bloody carcass behind in the slowly settling dust.

Two days later the fox carcass attracted a curious visitor, a visitor that illustrated in plain and basic terms the reality – and wonder – of nature.

The big dark bird arrived an hour after sunrise, soaring in looping, graceful circles in the clear, cobalt sky. Fluttering wingtips proved that the bird was riding rough currents of warm, rising air as an August sun baked the farmland below.

After twenty minutes of lazy circling the bird stooped toward the road, flared a dozen feet above the fox carcass, then made possibly the ugliest, most graceless landing in the history of flight. Slowly, almost painfully, with wings still spread wide, the bird hopped once, twice, three times toward the carcass. Folding its wings, the seemingly tiny, bare red head became apparent, almost glowing in the slanting morning sunlight. 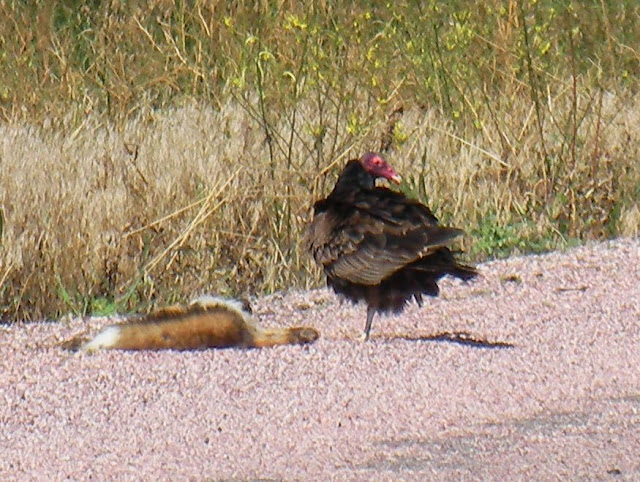 The Turkey Vulture (Cathartes aura) is far from uncommon across the High Plains, though populations are probably smaller than those of the more commonly seen hawk species. Often called Turkey Buzzards, the big, dark birds are almost exclusively carrion eaters. Graceful on the wing, they are rather clumsy on the ground, and even somewhat ugly with their red, naked head. They serve a useful purpose, though, helping to clean up the remains of dead animals. Turkey Vultures have one of the most highly developed olfactory systems of any animal, and can scent decaying carcasses at incredible distances. 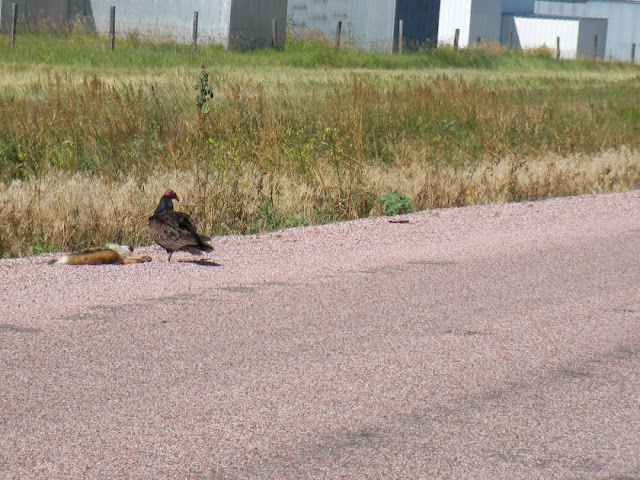 Remarkably, the Turkey Vulture’s acute sense of smell has proven uniquely useful to mankind in recent years, as they have the ability to detect and ferret out small leaks in natural gas pipelines, scenting and homing in on the ethyl mercaptan additive in commercial natural gas.

A closer look revealed the reason this particular Turkey Vulture seemed so clumsy on the ground – it had only a single leg. Other than the missing leg, the bird seemed to be a healthy adult. Whether the missing limb was a congenital or traumatic defect, it didn’t seem to have kept the vulture from thriving. 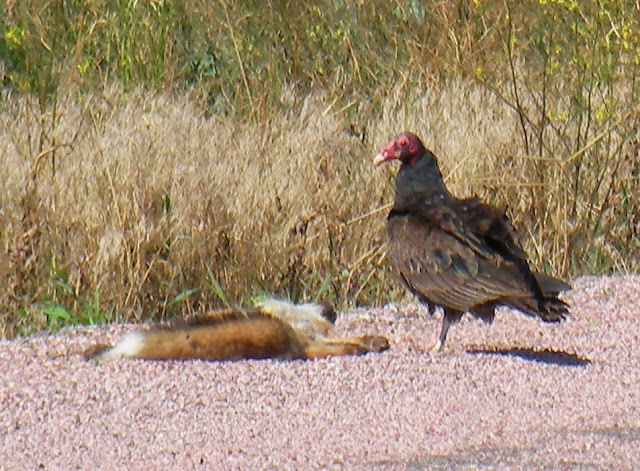 Author and historian Douglas Brinkley recently appeared on C-SPAN touting his new book, “The Wilderness Warrior: Theodore Roosevelt and the Crusade for America,” the story of the former president’s contribution to the conservation movement. Brinkley noted that Roosevelt, sometimes called America’s only conservationist president, was responsible for setting aside more than 230 million acres of “wilderness” and launching the National Park system. 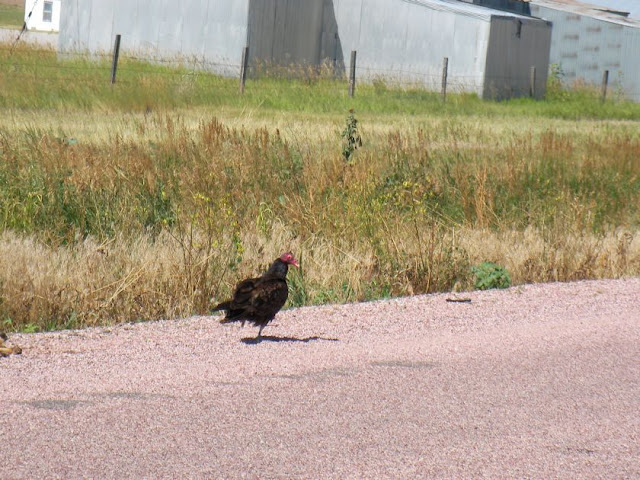 Like Roosevelt, Brinkley was a sickly child, and again like Roosevelt, he feels strongly drawn to nature and the country’s “unspoiled” lands. Especially smitten by the High Plains, Brinkley said that he travels to the region annually to “...recharge my spirit by getting back to nature,” a practice he highly recommends. Brinkley calls the National Park System a national treasure and a life-saver for millions of Americans suffering from nature deficit disorder. 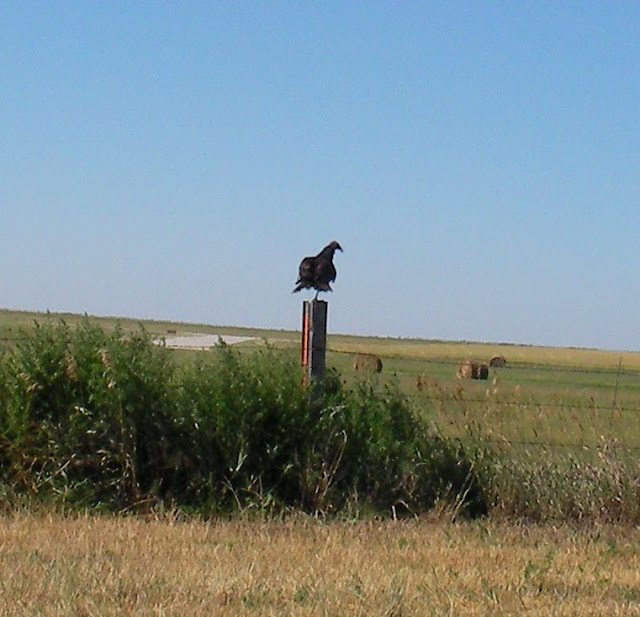 Those of us who lead rural lives, particularly farmers and ranchers, spend many – if not most – of our working lives outdoors and in the midst of nature. Though few of us live in majestic national parks, we are surrounded by and interact with native and wild flora and fauna on a daily basis. We tend to take our daily experiences in nature for granted and rarely give thought to the hundreds of million Americans who visit nature only during brief, whirlwind vacations.

Though in general use the term “rural” of carries the negative connotations of poverty and backwardness, especially among urban conversationalists, we rural Americans are rich in our nearness to nature and the “real” world, as encounters such as this one illustrate.
Posted by PrairieAdventure at 2:38 PM