He wasn’t Haji then, he was just a week old calf abandoned by his mother, laying near death on the south side of a stock tank.

He looked like a brown bag of bones, eyes closed and breathing so slowly and so shallowly that he almost wasn’t. His gums and tongue were pale and as cold as the dust he lay in. He looked deflated, like a week-old party balloon. Not completely flat but close to it.

He was dehydrated and hypothermic, and those paired threats would kill him in short order if not immediately treated. He may already have been on the wrong side of the survival curve, past the point of recovery. But he was still with us, the spark of life was still there.

I scooped him up and placed him on the back seat in the pickup cab. He was surprisingly hard to lift and carry. Completely limp and utterly unresponsive, he was like a 60 pound bag of jello. His head lolled and hung off the side of the seat, so I had to shift his whole body to close the door. As I drove out of the pasture and headed to the home place three miles down the road I wondered if he’d survive the five-minute drive.

At the barn I lay him down in the sunshine on a bed of clean straw. He seemed a little bit more responsive, moving his legs and weakly trying to lift his head. Maybe that was a good sign, but maybe it was just a last bit of thrashing before death, which seemed to hover oh-so-near on that crisp April morning.

At the house I mixed a cup of electrolyte powder – mostly salt and sugar – in a quart of warm water and poured it into a soft plastic drenching bag. I fitted the long esophageal tube to the bag and retraced my steps to the barn. The calf was still alive and seemed to be breathing a bit more regularly. But he was still flat out and unresponsive.

I rolled him upright, legs underneath, and held him in place between my legs. Bending down, I raised his head to a hyper-extended position with my left hand and slid the drenching tube into the side of his mouth. With gentle pressure and a little jiggling I worked the tube down his esophagus and into his stomach. As soon as the end of the tube cleared his esophagus the electrolyte solution began flowing. The calf weakly chewed on the tube as the warm fluid filled his belly. His tongue and lips felt icy cold on my fingers, a sure sign that he was deeply hypothermic.

When the bag emptied I tossed it aside and moved the calf to a clean straw bed in a warming box. The box was a cube about three feet on a side, and equipped with an infrared lamp. The calf was still flat out and mostly unresponsive, but still alive and breathing. “Hang in there, buddy,” I said as I vigorously rubbed him down. I hung an old saddle blanket over the opening of the warming box to help hold in the warmth, then left to get on with morning chores. I’d done all I could for the calf. His survival now depended on whether he had enough energy left to make proper use of the electrolyte. Having never seen a calf this close to death recover, I gave him little chance to survive. 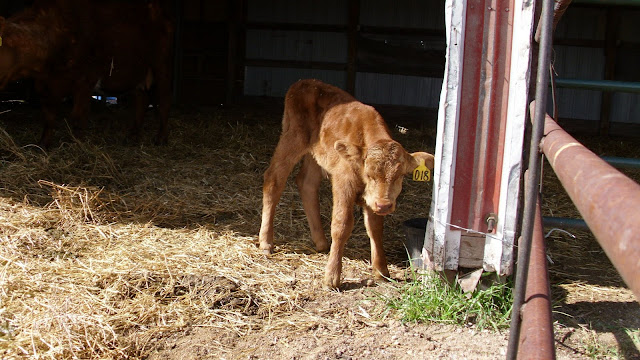 When I returned to the barn thirty minutes later I was pretty sure I’d find a corpse. But when I looked at the warming box, much to my delighted surprise, the calf was standing up, trembling a bit, and looking around. He tried to step out of the box but didn’t quite have the energy to get over the six-inch lip. “Hey, buddy, you’re looking good,” I said. In truth he looked sick and bedraggled and woebegone, but for all that, he was remarkably improved from when I’d left him. 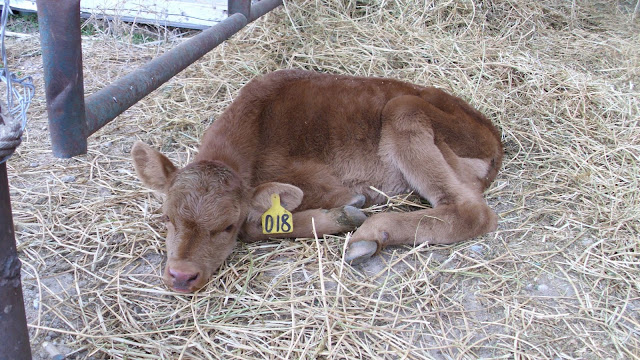 The slanting morning sun was still bright and warm, and the forecast was for clear skies and moderate temperatures, so I moved the calf back to the sunlit straw bed near the south door. He was very weak and still shivering a bit, but he could hold his head up now and the sunshine would provide gentle, natural warming. He wasn’t out of the woods yet, but he had a fighting chance.

The next two weeks were far from easy for the calf. He needed electrolyte drenching a few more times, and drenching with milk replacer, too. He rallied and faded three or four times in the first week, then began to slowly progress day by day. He learned to take milk replacer from the bottle, and I fed him colostrum collected from a couple of new momma cows to give his immune system a boost. 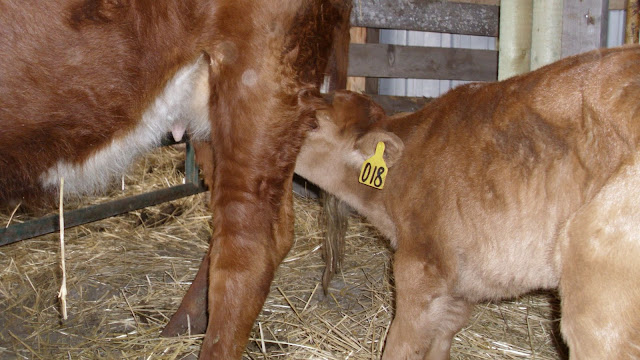 In a perfect world we’d have been able to get a cow to adopt him. We had two candidates, a cow and heifer, each of which had lost a calf. But for one reason or another, neither would pair up with the hard luck calf. The calf knew what to do and was happy to nurse when the cow was restrained by a headgate, but he was either too weak or too timid to persist when the cow pushed him away or otherwise discouraged him.

We continued to bottle feed the growing calf and he quickly became a farmyard fixture, ambling around the outbuildings and through the windbreak, nibbling on tender spring grass and weeds and finding warm, sheltered spots to lie up and sunbathe. Mom took to feeding him his morning bottle, and the calf would follow her around whenever she was outside. One day he even followed her into the house, nipping quickly through the door behind her. He came to grief on the slick tile floor, though, slipping and falling heavily, then scrabbling and flopping wildly as he tried to regain his feet. After that experience he’d come to the door and look inside but never again tried to enter. 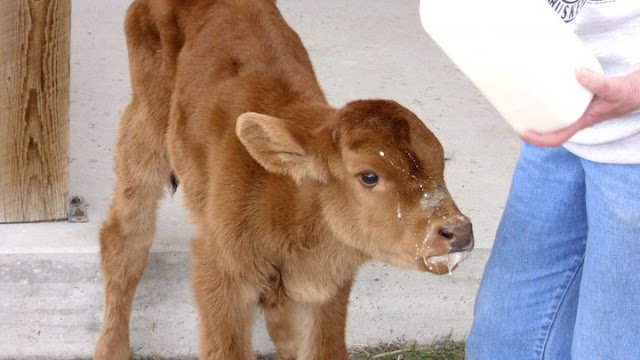 After a couple of weeks we turned him out with the first-calf heifers to see of he could learn to “steal” milk, and he got pretty good at it. He learned to sneak in from behind while a calf was nursing from the side, and the mild-tempered new mommas tolerated his antics quite well. He wasn’t the only “thief,” either. One of the smaller heifers had given birth to twins, and the plucky brother and sister soon learned to nurse from the closest and most convenient udder. We kept feeding the orphan calf a twice-daily bottle, and he was soon growing like a weed.

The calf took on an interesting personality, seemingly at home both in the herd and around people. Mom opined that we treated him like a sacred cow, so we took to calling him Haji. A long list of youngsters got in on the bottle feeding act, town kids and visiting grandkids and nieces and nephews. The kids delighted in feeding him, and he seemed to enjoy being around the kids. His primary interest was always the bottle, of course, but he always looked at, sniffed, and licked the “miniature” people (which the kids enjoyed more than their mothers). 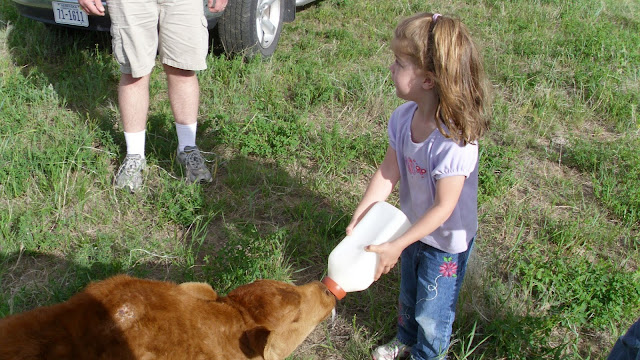 After 60 days we stopped the milk replacer and Haji was on his own. He was eating grass and had become an expert at nursing on the sly. He continued to grow at a rapid pace and eventually caught up with and surpassed some of the younger calves. It was a good summer to be a bottle calf, with abundant grass and lots of sweetclover and plenty of young cows to sneak a bit of nursing from. At preconditioning on Oct. 9 he weighed in at 400 lbs. He was the lightest of the calves out of the mature cow herd and fell 140 lbs. below the average of that group. He was on the light end of the group out of the first-calf heifers, too, but not the lightest, and only 72 lbs. off the average weight of that group. 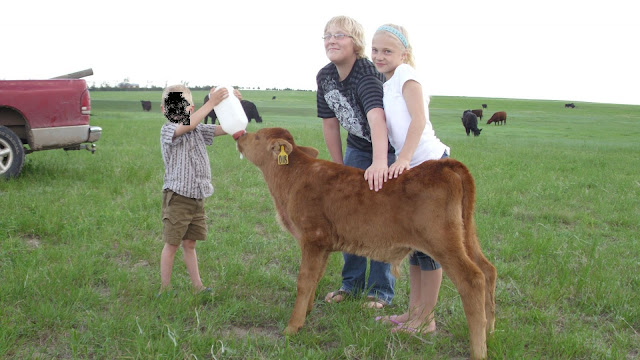 As we worked him in the chute, applying a brand and giving him shots, he was pretty much indistinguishable from the other calves, healthy and strong and anxious to leave the chute and get back to the pasture.

The time and expense of bottle feeding Haji will eat into his profit margin a bit, but not a lot. Though the battle to salvage orphan calves can be a tough and vexing one, it pays off in several ways. Firstly, of course, at the sale barn, where you can only sell the live ones. Secondly, the challenge is enjoyable, and part of the responsibility of animal husbandry. Finally, every bottle calf represents an opportunity to introduce a crop of youngsters to the ranch and the ranching experience. Most of those kids will remember seeing the cows and calves grazing naturally on grass and remember feeding Haji in the warm sunshine. Perhaps they’ll be less inclined to believe the anti-ag stories spun by those who’ve never actually visited a ranch. 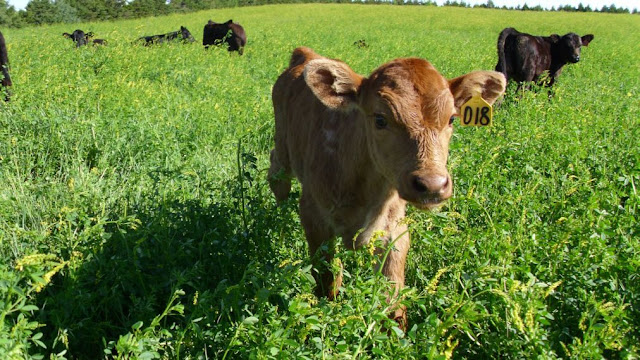 Posted by PrairieAdventure at 2:15 PM No comments: