Out through the fields and the woods


And over the walls I have wended;
I have climbed the hills of view
And looked at the world, and descended;
I have come by the highway home,
And lo, it is ended.


The leaves are all dead on the ground,
Save those that the oak is keeping
To ravel them one by one
And let them go scraping and creeping
Out over the crusted snow,
When others are sleeping.


And the dead leaves lie huddled and still,
No longer blown hither and thither;
The last lone aster is gone;
The flowers of the witch hazel wither;
The heart is still aching to seek,
But the feet question ‘Whither? ’


Ah, when to the heart of man
Was it ever less than a treason
To go with the drift of things,
To yield with a grace to reason,
And bow and accept the end
Of a love or a season?


The last six weeks have been kind of awful. Life's like that sometimes.

He'd gone on hospice about 12 days previously. He was still feeling somewhat good -- for certain definitions of good. During the first week he'd been able to sleep in his own bed, which was important to him. He had to give up the walker as he just couldn't make his feet and legs do what he wanted then to do. He still had a great deal of strength but he'd simply lost control of parts of the motor nerves. I could tell that it was quite vexing for him on a number of levels. In place of the walker -- which was in some sense his independence -- hospice brought over a nice wheelchair. We could still pretty easily get him in and out of bed, to the benjo, in to wash his face and brush his teeth, then out to the kitchen table for breakfast, which he continued to enjoy.

After breakfast we wheeled him into his "man cave" and his recliner. From there, with the exception of lunch and supper in the kitchen, he did what he's been doing for the last 18 months or so. He read the paper and magazines, worked sudoku puzzles, read his kindle, and watched television. Then back to bed for a good night's sleep and start it all over in the morning, Every other day I drained about 4 liters of fluid from his abdomen.

Though Dad was born at less than three pounds and initial projections regarding his immediate survival were anchored to a very flimsy reed, he quickly rebounded and grew up strong and healthy. Until the end I never saw him as anything but a big, strong fellow; it had to do with genetics of course, but even more to a life of hard work and dedication and what Henry Wadsworth Longfellow alluded to -- an innate skill "to labor and to wait."

But his time was running out.

On Tuesday evening he managed to roll out of his bed. On Wednesday Hospice brought a hospital bed, We set it up in the "man cave" so that he could look outside if he wished, or watch television. Once ensconced in his final earthly bower, however, he never looked at the television. I do not know if he looked outside. That evening he said he wanted to sleep in his own bed but he didn't argue much. I think he was too far gone,

On Thursday he could still visit a bit, Thursday morning he wanted some breakfast pizza and apple juice. He was still able to eat and swallow but he was very nearly comatose. That pizza was the last meal he ever ate. We fed it to him bite by bite and he ate most of a single serving pizza. He said it was good, and when we asked he wanted more, until, finally, he said, "that's enough." Throughout the rest of the day he bantered off and on a brief intervals with several grandchildren.

That evening he wanted to sit on the camode, and after a monumental struggle my brothers and I had him so ensconced, but nothing came of it. It was a hard struggle to put him back to bed. I could tell by the way he clutched at me that he was very worried about falling. I held him close and strong and we got him back to bed. "I gotcha Dad, I gotcha. It's okay, you're not gonna fall. I gotcha."

It was almost the way a father might comfort a son in a similar situation. Only completely different of course.

That was the last time Dad was up, and to the best of my knowledge the last time he was anything close to conscious. I believe that this was the moment he began to take the last journey.

Over the next 72 hours his breathing pattern began to shift. It wasn't anything abrupt or alarming, the rate and rhythm just slowly changed. By late on Sunday he'd completely shifted to Cheyenne-Stokes breathing, which roughly means that little other than the autonomic nervous system was still operating. He never seemed in pain or distress. Every now and then he'd seem a bit agitated and we'd give him just a touch of morphine and ativan to control any anxiety he might have been having.

Mom and I and the sibs who could be here were here. Many of the grandkids who could visit did so in the days previous. It was a quiet time, and even though we were all prepared, none of us -- least of all me -- were really prepared.

And because I'm such a blaspheming pseudo-poet...

What the Heart of the Young Man Said to the Psalmist

Tell me not, in mournful numbers,
"Life is but an empty dream!"
For the soul is dead that slumbers,
And things are not what they seem.

Life is real! Life is earnest!
And the grave is not its goal;
"Dust thou art, to dust returnest,"
Was not spoken of the soul.

Not enjoyment, and not sorrow,
Is our destined end or way;
But to act, that each to-morrow
Finds us farther than to-day.

Art is long, and Time is fleeting,
And our hearts, though stout and brave,
Still, like muffled drums, are beating
Funeral marches to the grave.

In the world's broad field of battle,
In the bivouac of Life,
Be not like dumb, driven cattle!
Be a hero in the strife!

Trust no Future, howe'er pleasant!
Let the dead Past bury its dead!
Act,--act in the living Present!
Heart within, and God o'erhead!

Lives of great men all remind us
We can make our lives sublime,
And, departing, leave behind us
Footprints on the sands of time;

Let us, then, be up and doing,
With a heart for any fate;
Still achieving, still pursuing
Learn to labor and to wait. 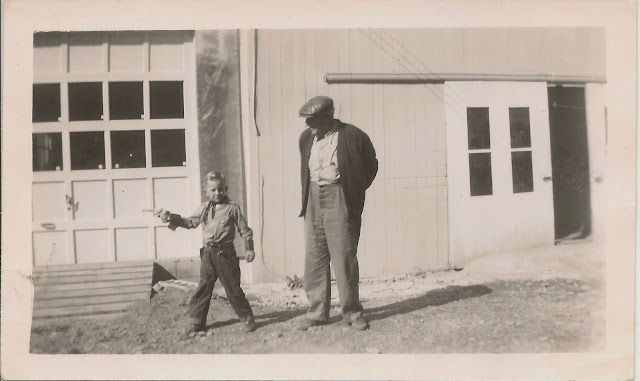 Posted by PrairieAdventure at 4:09 PM 40 comments: