I try to be careful to change names, but to the best of my recollection the events and locations are substantially correct. Of course I can only describe events from my perspective, so there's that. Readers who were present will doubtless have different recollections of any particular event. This is what it was like to serve in my tiny slice of the U.S. Navy between the late 1970's and early 1990's. It really was an adventure.

This is no shit!
##########
April 10, 2021. I've updated this post to flesh out the initial storyline, which for some reason I left dangling back in 2016. Looking back to 1985 from the Olympian heights of being much, much, much older, I see that this was a more formative experience than I realized at the time. On that dark night I saw a lot of heart and courage demonstrated by my teeny-bopper flight deck brethren, I saw leadership executed well and appropriately. The old dudes -- the boat/airwing dinosaurs -- led like leaders. I also witnessed firsthand one of the most spectacular feats of airmanship I've ever seen.
##########
I watched as a Hawkeye crossed the ramp of USS Boat. The big Grumman turboprop looked slow coming aboard, especially when compared to the rest of the Airwing's aircraft (save for the helos of course). There is something majestic about an E-2 in the final moments of approach; she seems to hang suspended in the night air, held aloft more by sound than aerodynamics. In the moment I smiled and relished the magic of being there. Precious few ape-lizards can even conceive of having such an experience.
Beneath my feet the carrier began to heel into a course change. Up on the bridge someone was either uncomfortable with available sea room, impatient, or feeling the need to be a shit hot boat driver. It was only a small vector change for the mighty ship, but it irritated the sky gods.
Turning the boat a degree or two doesn't seem like much, but it caused multifaceted changes in the burble of disturbed air flowing around the island structure and across the landing area. The Hawkeye was swimming in a sea of air as it came over the ramp and the change in airflow began to push the aircraft to the left. The pilot made an aggressive wing dip to the right to get back on centerline. It was a bit too much. The Hawkeye slammed down too far to the right.

It was late March 1985, during workups. We were down in the Caribbean fighting Orange Air and preparing for our final pre-deployment battle exercises. I was working nights on the roof, but I was also seeing morning sick call most days and flying about every other day. I was tired, but so was everyone else. The kind of tired that only a relatively few people ever experience.  It's not a lot of fun to work that hard but it's the mission, and you're always glad for it later; glad that you had the opportunity to push limits.

I'd worked the night before, seen sick call from 0800-1000, got in a short nap, briefed and flew a two-cycle plane guard hop, got another nap, then relieved the watch at 2000. We weren't quite flying around the clock, but the first go was usually launched around 0700 and the last recovery wrapped up around 0300.

This night the last fixed wing of the last recovery was, as usual, the Hummer.

The bow was packed with jets, all four rows filled to capacity with F-14's, A-6's, and A-7's. There were Queers on the point and on the finger, all three starboard side EL's were hosting Hoovers, there were helos and Hummers inboard of the island, helos on the patio, and four or five Corsairs parked in the six pack, tails toward the landing area. It was crowded up there.

With the Hummer at five miles I headed for the BDS. It was the end of the last launch/land cycle of the day, and I had work to do in the BDS. With just the Hummer and a pair of Sea Kings left to land, nothing was going to happen anyway (complacency, anyone?). While working my way along the starboard side of the island I changed my mind. Some part of my brain hinted that I would only ever have a limited number of opportunities to "stand right there" and witness amazing stuff. My choice was to get out of the noise and stink and work on medical gear inventory, or to go watch the E-2 trap from a perfect(ish) vantage point. My feet took me right past the BDS hatch and on aft to the junkyard. Watching recoveries from this area was pretty strongly discouraged but wasn't exactly forbidden. It was probably the best seat in the house for watching aircraft trap, but no one wanted a crowd to be gathered there if something went wrong.

Long story short, something went wrong. The E-2 landed long and right of centerline, almost on the starboard ladder line. It was a nearly exact duplicate of the disastrous EA-6B landing and crash back in 1981, and I nearly emitted waste products. 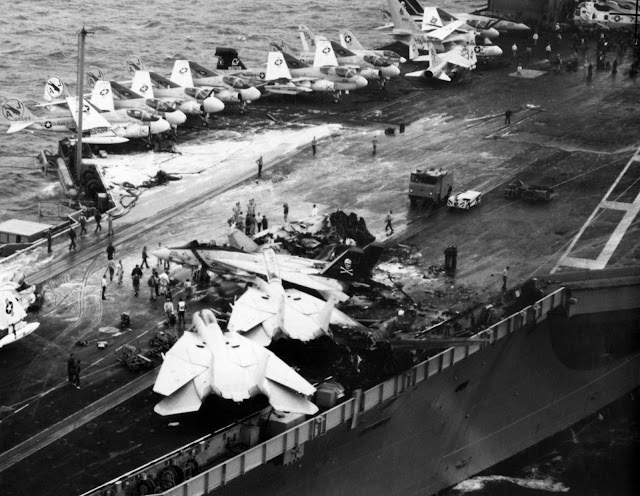 Fortunately, the Hummer wasn't as far right as the Playboy Queer had been, and there wasn't a tow tractor on the foul line. The big turboprop AWACS poured on the coal, and with sparks flying from its unengaged tailhook, lifted off after only a short deck run. The winds were mostly axial, so he was a little bit right wing down at first, just long enough to drag that wingtip through the vertical stabs of the A-7's parked in the six pack.

In an instant the air was filled with swirling debris. I watched in horror as the E-2's now detached wingtip whirled through the night, pirouetted and reversed course, then tomahawked an unsuspecting brownshirt standing in the four row with his back to the action. The brown shirt went over the side in an instant; there one moment, gone the next.

As debris rained down on the bow, seemingly dozens of people were hitting the deck. Injured or dodging? It was impossible to tell.

I was already sprinting toward the crotch, scampering diagonally across the landing area, running all out toward the place I'd last seen the plane captain. I might have been the only one to see him go over, and if he'd ended up in the water we needed to get a man overboard called away.

As I sprinted I was also looking for some sign of the Hummer. A big splash would be bad. Finally, after what seemed an eternity, I saw his position lights climbing away. Two of them anyway, the third resting on the flight deck with the rest of the wingtip.

I skidded to a stop at the crotch and looked into the portside catwalk. There was the plane captain, flat on his back, eyes big as onions. Thank God. He was okay, just surprised and stunned and scared and pissed.

"There's something in my fucking eye," he complained. He could move okay, and nothing else seemed to be damaged, so I sent him to the BDS.

"I'll be there as soon as I can, but I gotta check for casualties first." If I remember correctly, and I do, I was kind of a dick about it.

Fortunately, there wasn't a single casualty. It took only a few minutes to clear away debris and conduct a FOD walkdown. About 15 minutes later the Hummer came aboard, single engine, and missing about 15 feet of wing. Superb airmanship.

"We had a minor crash on deck about a week ago. An E-2 missed the wires and hit four planes with his right wingtip. My heart was in my throat for a while. I was sure we had a lot of casualties as everyone hit the deck. Thank God no one was hurt or killed. Tell great-grandma happy birthday for me (she'd just turned 100). Have a great summer, tell everyone hi and I'm doing fine. Late for a brief so gotta go. Love, Shaun"

##########
Fast forward thirty-one and a quarter or so years. It's July 9, 2016. The tube of yew suggests I watch a video entitled "cable snaps on USS Eisenhower during landing." The date on the video is July 8 but the event happened on March 18. I take up the suggestion.

It's a PLAT video, centerline deck view first, with an E-2 rolling into the groove. Looks good at first, then he settles and goes flat at the ramp. A little wing dip for lineup and he bags a four wire. Ugly but serviceable.

The view switches to the island camera. The arrestment looks good at first but wow, that's a long, high speed runout. I start to get a bad feeling. He's at the third rung of the ladder line and still going like hell when the cross deck pendent parts. The cable flails back toward the foul lines on both sides of the landing area and people run and jump for cover.

"Fuck, they went in the water."

Thirty-plus years melt away and I feel the punch-in-the-gut sensation of watching five dead guys live out their last mortal moments. My heart plummets and all I can do is wait for the splash of white water, the ephemeral grave marker shared by so, so many naval aviators.

And then, a miracle.

Those guys weren't even a sparkle in their mommy's eyes 31 years ago! Superb airmanship.

Eight sailors were injured by the flailing cable. Judging by the injury descriptions in the JAG report, one of them was very, very seriously injured, and another three were quite badly hurt.

I watched the follow-on video of the WAVY-TV newscast regarding the mishap. The asshole reporters almost made me cry they were so horrible. I remember when that was a good television station.

But it was good to watch the video of the helo crews at Norfolk General. Been there, done that. Before any of them were born, either!
##########
Here's a little bonus content on the mighty Hawkeye, courtesy of The Fighter Pilot Podcast. There's good info here, and good info in many of their podcasts, but I have to say that Jello rubs me the wrong way in many if not most of his presentations. That's just my personal opinion about his interview style though. I don't know the dude. Anyway...
Be well and embrace the blessings of liberty.


Posted by PrairieAdventure at 8:00 PM