Weather and the science of Liberty


It's a lovely, coolish early July morning as I write this, 72 degrees at 0630 with just a puff of westerly breeze, not more than 3-4 mph. Humidity stands at 49 percent and viz is all the way beneath 8/10 cloud cover with bases at about 4,500 feet AGL.
I'm a touch grumpy this morning following last night's firework depredations. My friends and neighbors went all out, and launched a final, thunderous barrage just after midnight. Which is long past my bedtime, thus the grumpiness.

However, coffee and a pretty morning are slowly working their magic.

Coffee and pretty soon had me out hiking the south unit. My "work" excuse for the hike was of course grass scouting and cattle inspection. On foot and at a hiking pace I can easily see what grass the cattle are taking and how much. This tells me a lot and allows me to make better and more informed decisions about managing both cattle and grass asset.
The same thing applies to inspecting cattle. On foot and at a walking pace I see more and am able to observe details that I'd probably miss with part of my brain concentrating on driving. More complete information makes for more informed and better decisions. At least in theory. 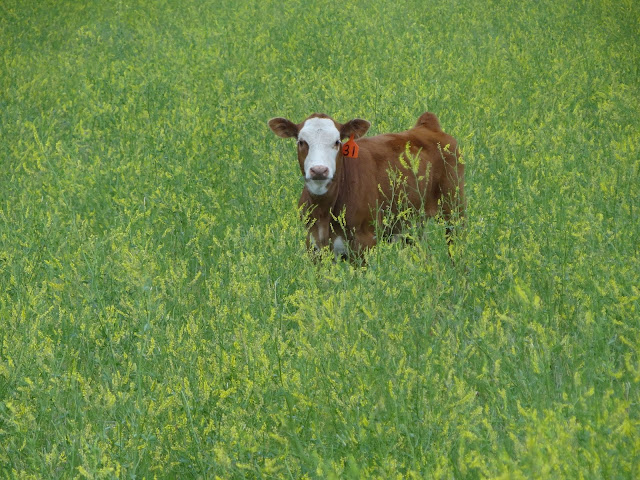 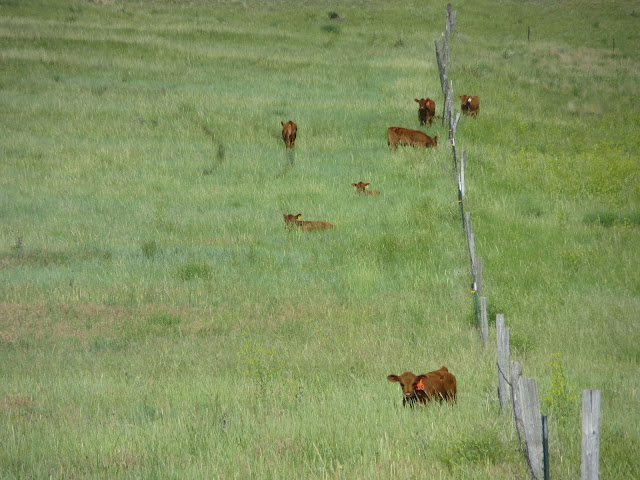 Of course a very large part of hiking vs driving, at least for me, is the great pleasure I take from hiking the prairie. Leaving aside cattle and grass management, the prairie is endlessly fascinating. No two days are the same, no two hikes are the same. In addition to the observational pleasure I take from hiking, I also take a great deal of pleasure from the exertion of the hike. It gets the blood pumping and blows out the cobs, as it were, and always makes me feel better, physically and mentally.

As I hiked along the coolness of the morning quickly gave way to early July warmth. The heat wasn't oppressive by any means, and there was a bit of a westerly breeze, so it was rather enjoyable.

June precipitation was slightly above average at the ranch but pretty much dead normal in the surrounding area. We saw 2.98 inches at the ranch while the official county scorekeeper recorded 2.89 inches, compared to the 122 year average of 2.67 inches. Much of the remainder of the Panhandle and adjacent areas in northeast Colorado and southeast Wyoming have been drier this spring. The Panhandle average precipitation since April 1 stands at 7.5 inches, compared to the thirty-year norm of 7.9 inches, or about 95 percent of average. On the ranch we're at 9.66 inches since April 1, or about 122 percent of average.

Having all that moisture in the soil is quite nice. Cool season grasses are leggy and abundant. We've got western wheatgrass as much as 30 inches tall, and green needlegrass a full 36 inches tall. It's also a sweetclover year, and some of that is taller than my head! Warm season grasses are surprisingly tall as well, with buffalo grass approaching nine inches and blue grama 18 inches. Forbs are equally robust and the scenery is awash with summer color. 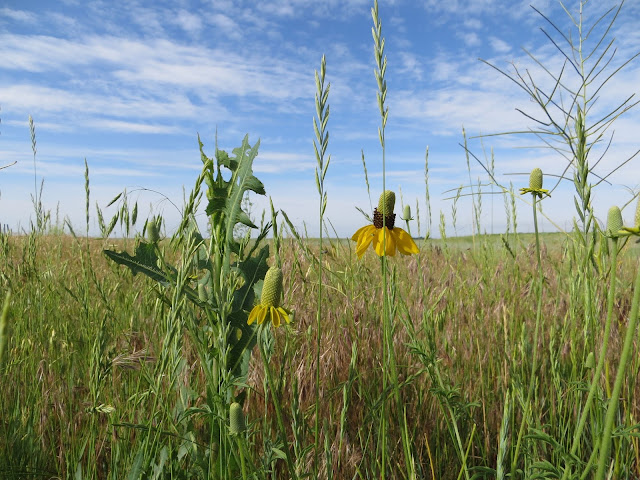 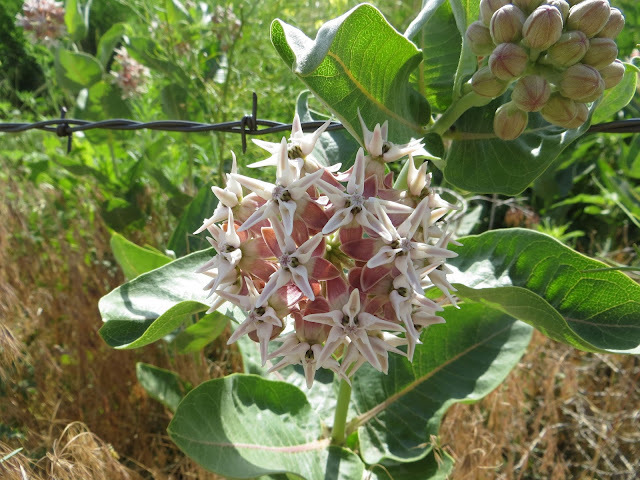 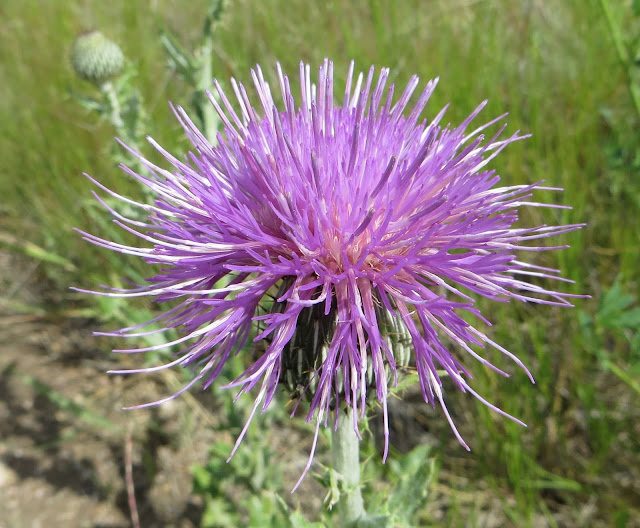 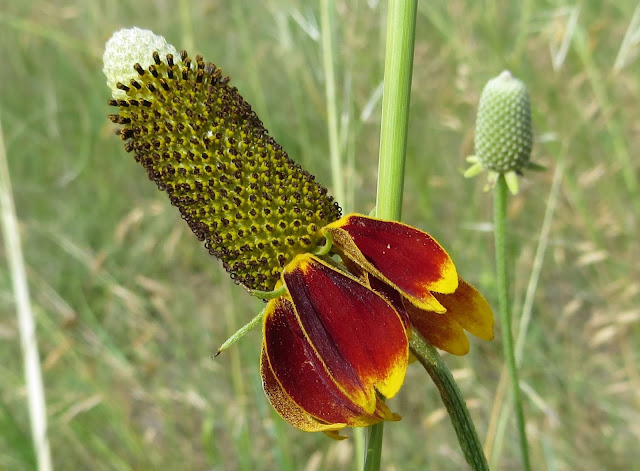 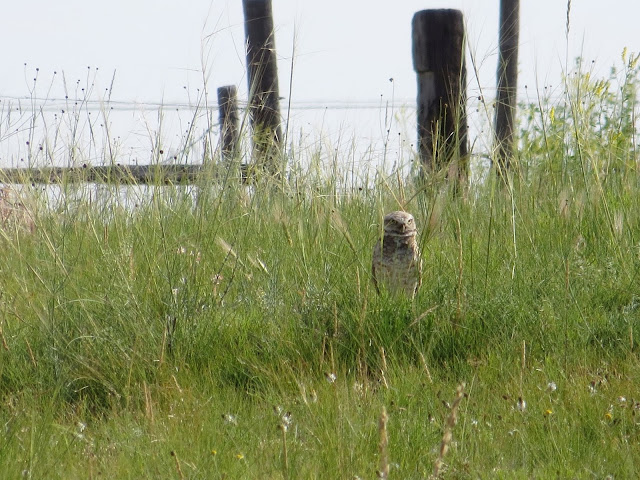 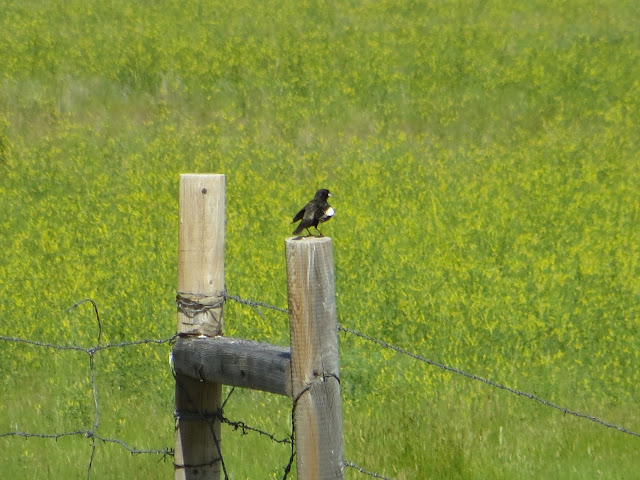 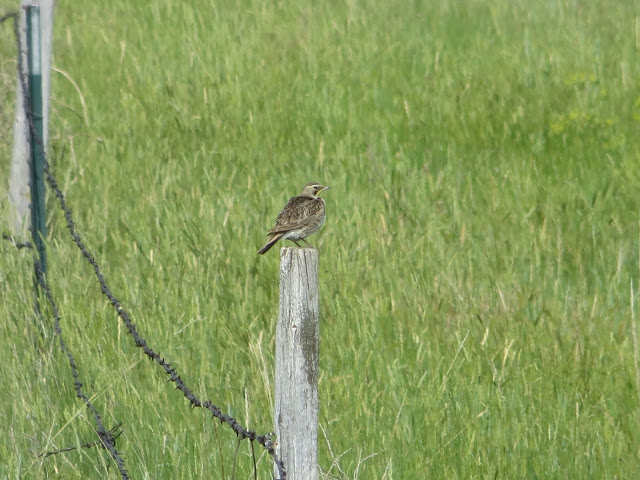 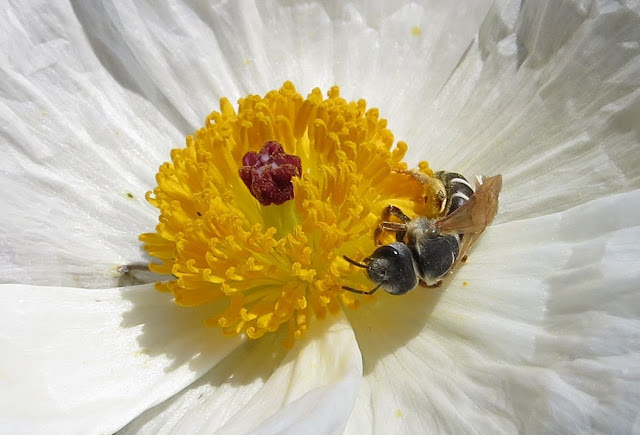 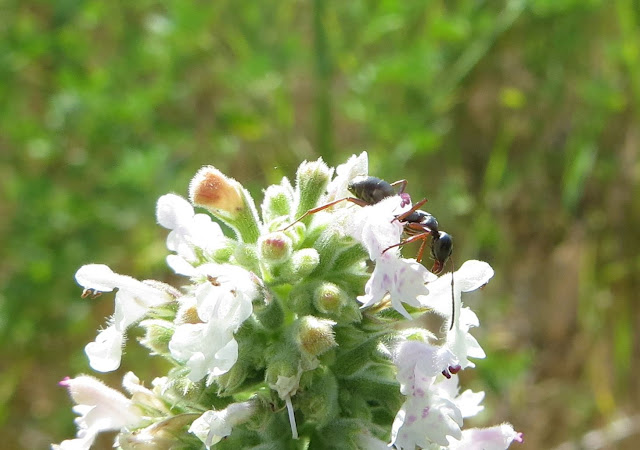 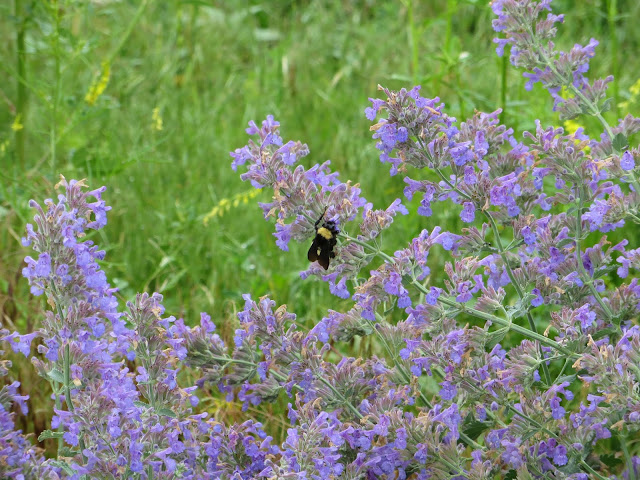 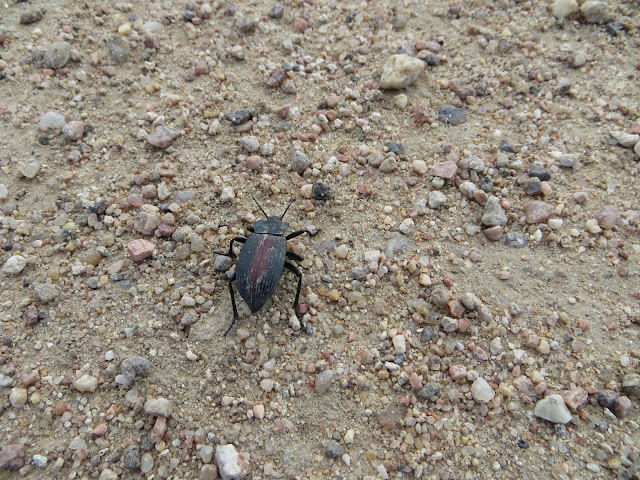 The large scale weather pattern is presently changing, with ENSO (El Niño Southern Oscillation) moving from El Niño to La Niña. What this means in the far, equatorial Pacific is that water temperatures and barometric pressures are changing by tiny increments. What it often means here on the High Plains is that we’re moving from a period of abundant-to-adequate precipitation to a period of less precipitation.

None of this is new. We live in a semi-arid climate zone, and this part of the world has seen routine wet and dry periods for at least the last 13,000 years. Only a couple of years ago, as 2011 began to fade, we moved from wet to very dry, cringed throughout the 2012 drought, and rejoiced when precipitation began to pick up again in 2013.

Are we presently heading for a drought? It’s possible, but it’s also impossible to know for certain. If you’re in it for the long haul, and most farmers and ranchers are, these precipitation variations are part of the great tapestry of life. We enjoy the good years and endure the dry years.

Tim Ferris wrote a book some years back called The Science of Liberty: Democracy, Reason and the Laws of Nature.

Now if you're a person like me, one who comes to both science and Americanism through reason and rigor, you can't help but be grabbed by a title like that.

Science, the method of understanding what is, where the foundational principle is that falsifiable evidence is the final word. The most beautiful theory, said Thomas H. Huxley (more or less), can be killed by an ugly fact.


Americanism, the method of ensuring individual liberty, where the foundational principle is that all men are created equal and endowed with natural rights.

In science, you may construct a beautiful and elegant theory describing why helium is heavier than air, or why the bumblebee cannot fly. Yet your theories crumble to dust in the face of a rising balloon or a buzzing bee.

In Americanism, you may construct a beautiful and elegant theory describing why some men are more equal, or why some men are less equal. Yet your theories crumble to dust in the face of more equal and less equal people who are, nevertheless and without question, human beings.

In both cases you can argue passionately and endlessly and never, ever, make a dent in factual reality.

So Ferris, of whom I'd never (believe it or not) previously heard, made an astonishingly good case for the absolute requirement for American Liberty to be supported, if not driven by, real science. And for science to be supported and driven by American Liberty. Science that is honest and rigorous. American Liberty, where the foundational principle is that all men are created equal, and endowed with natural rights.

That was the first 260 pages. Then came the final chapter, where he pretty much said that honest, rigorous science and American Liberty must bow to the One World Solution For Global Warming. It's simply too important for honesty, too dangerous for facts. Superior, vastly more-equal people, like Ferris himself, have no choice but to lie to, cheat, and steal from the untermenschen. There's simply no other way to save the planet.

So. Global warming. Or if you prefer to use the language of Ferris and the rest of the ubermenschen, climate change. Here is the theory. Mankind is burning fossil fuels to produce energy, and in the process, releasing carbon dioxide into the atmosphere. Carbon dioxide is a greenhouse gas -- that is, it absorbs and holds heat. Therefore, man-made carbon dioxide is trapping heat in the atmosphere of our planet, causing temperatures to rise. Unless something reverses this process the planet will heat up until it is destroyed. I think it melts or something.

Here's the ugly fact that kills the theory, the real truth that is really inconvenient to the ubermenschen. The planet is not heating up.

For the theory to be true, the planet must be warming up. If it is not warming up, the theory is false. Period. 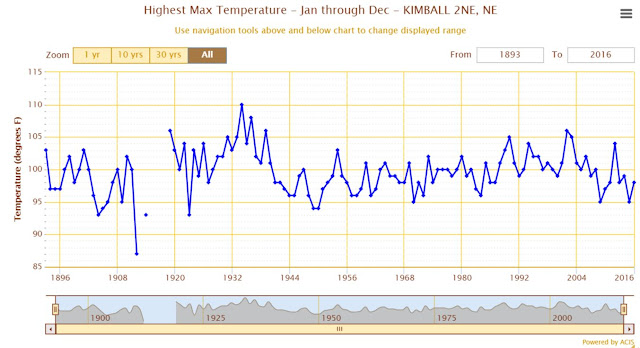 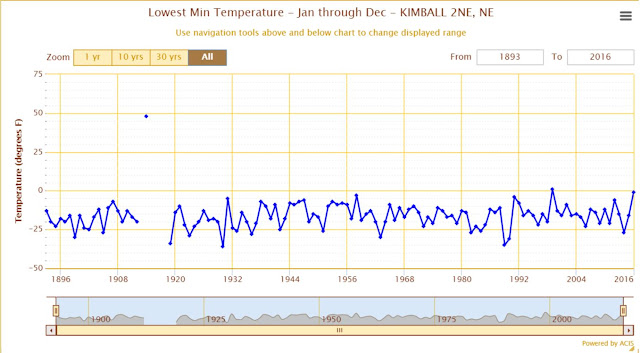 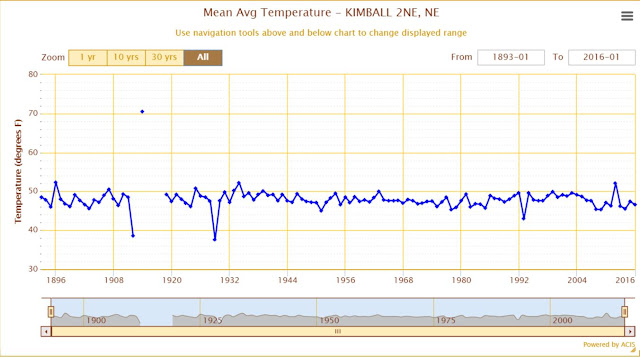 If the planet were heating up, Kimball would be heating up. There would be a clear upward trend on the graph. Take a look. You don't even need a close look. For the theory to be true, the planet must be warming up. If it is not warming up, the theory is false. Period.

I know, I know. The heat is hiding just now, deep in the ocean and far above in the sky. And it's lurking. Just waiting for someone to tell it that it's at the magical tipping point. Then it will attack!

You may recall hearing that February, 2016 was the hottest February the planet has ever seen. This was reported as absolute evidence that global warming is happening, as proof of the theory that fossil fuel burning is increasing atmospheric carbon dioxide which is trapping heat in the atmosphere which is causing global temperatures to rise which will soon melt the Earth and prevent the production of cheetos. Everybody, and I do mean everybody, agrees. It's a consensus. February, 2016 was the hottest February of all time, and that means the tipping point is nigh! 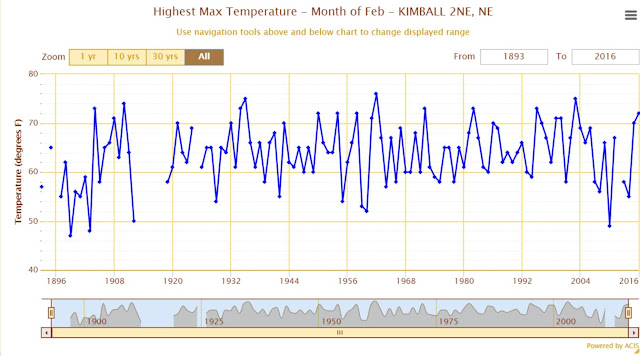 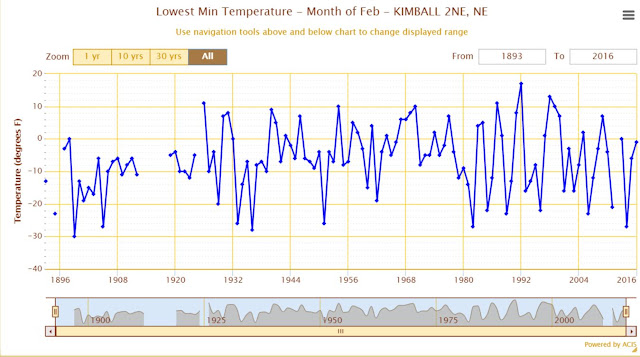 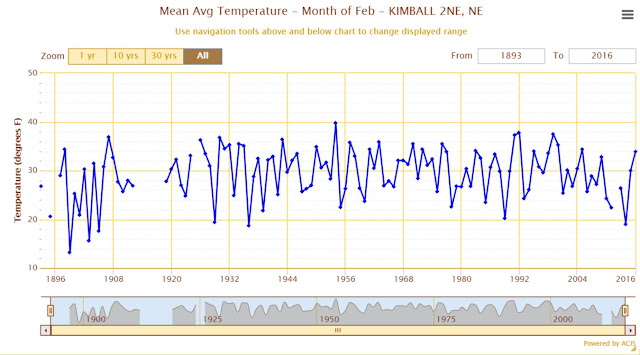 So how is it that February, 2016, was universally reported as the hottest February of all time?

Well... The reporting agencies were NOAA and NASA. What they failed to mention, or perhaps mumbled under their breath, or only included in the supplemental notes, was that they only looked at the period of 1959-2016, and then only at the data that they had "scientifically smoothed."

It's what you and I would call lying. They changed all the numbers that didn't agree with February 2016 being the hottest month of all time.

So there you go. The science of liberty. Yay.

Posted by PrairieAdventure at 3:04 PM