I try to be careful to change names, but to the best of my recollection the events and locations are substantially correct. Of course I can only describe events from my perspective, so there's that. Readers who were present will doubtless have different recollections of any particular event. This is what it was like to serve in my tiny slice of the U.S. Navy between the late 1970's and early 1990's. It really was an adventure.
Remember,
This is no shit!
An editorial note: I've updated this post slightly as of January 9, 2021. I've tweaked the writing a bit to make it flow more betterer, as well as to use more standarder words and phrasing and such. I've fixed (I think!) the font trainwreck provided by burgle in their transition to afunctionality across their blogging platform.. I haven't changed anything substantially.
In the previous iteration I noted that I don't have a mission statement in this place because, "Too bureaucratic. Too often written to mislead and deceive. Usually an effort to feel really good about something without doing the hard work and good work which can lead to good feelings." What passes for a mission statement here is in the italicized text at the top of the post. It holds true for the CC series. I'm not sure about the rest of the blog, which is kind of a mess! 😉)
##########
For Nimitz and CVW-8, it had been a very long deployment.


By the time May 3 rolled around we’d been continually at sea for more than 120 days. 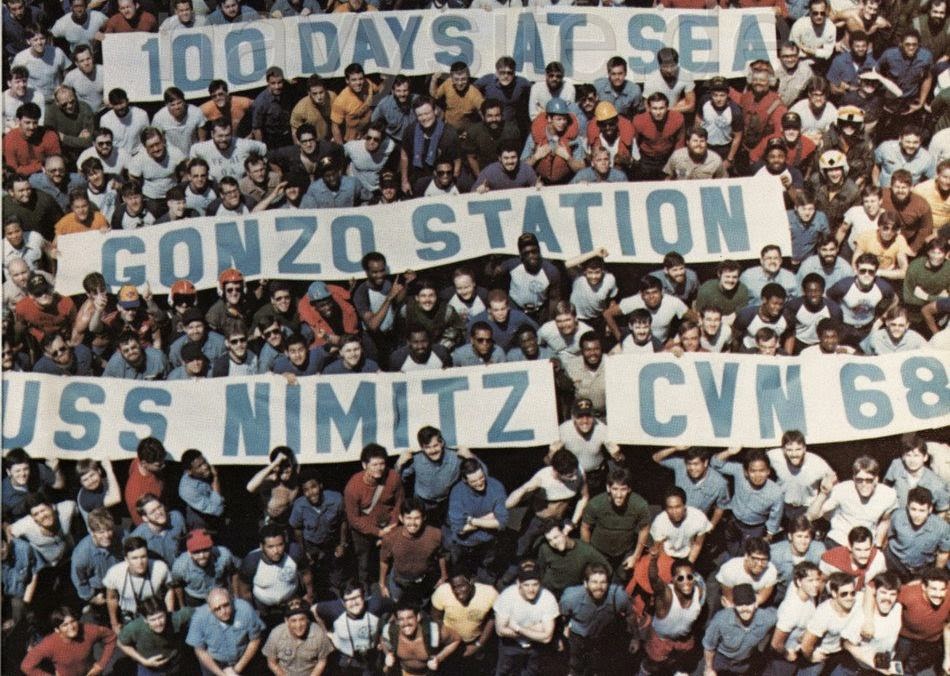 We’d been operating hard since early January. The deployment had been long and exhausting and, to some extent, heartbreaking. But the end was in sight. Ike was due to arrive in three days time, and after a two-day turnover, we’d head for home. But Ike wasn’t here yet, and May 3 was just another day at sea.


I was working nights on the roof. One of the day check guys was sick and on bed rest, so the Senior Chief asked me to fill in until he could find a temporary replacement. We both knew this was a fiction. Only four of us (two on days, two on nights) had our roof quals signed off. I was actually being asked to pull a 36 hour shift. It wasn’t as bad as it sounds and I’d done it before. Hell, I was still growing! I could catch a few winks in the Flight Deck Battle Dressing Station (FDBDS) from time to time, and there was a fairly light flight sked in the afternoon, so it wasn't a big deal.


As with most parts of the carrier experience, working on the roof was a paradox. I loved it and I hated it. It was fun and exciting and one of the most unique aviation jobs in the world. It was a terribly dangerous place to work, and that was why corpsmen manned the FDBDS. Four-and-a-half acres sounds like a lot of real estate, but throw 45 tactical jets, turboprops and helicopters up there, start ‘em all up, move ‘em around, shoot some of ‘em off with steam catapults while catching others with tailhooks and arresting gear, and do all this while pulling maintenance, uploading and downloading ordnance, fueling the thirsty aircraft, while the carrier is charging along through the sea at 30-plus knots…
And oh yeah, day and night, fine weather or foul. It can be sporty.


Exciting, busy, intensely interesting, risky, loud, kinetic, fun. Hot, swelteringly hot. Or cold. Bone chillingly cold. Sheer misery. Windy, both from the weather and from the ship’s velocity as she charges through the sea. Jet exhaust that stings your eyes and scorches your nose, producing tears and snot in profusion. Jet blast that can pick you up and fling you across the flight deck like a ragdoll. That's always a bad thing. Not infrequently fatal.


Long, long hours of this stuff. Day after day. Week after week. Month after month. On a long deployment unbroken by port calls, excitement and danger eventually morph into boredom and complacency. Everyone walks a vanishingly thin line between safety and eternity. Not just on the flight deck or in the air, either. Complacency stalks everyone and is no respecter of rank, station or experience.
I got my head down for about four hours before flight quarters sounded. The narrow, thin-padded treatment table in BDS is actually comfortable if you’re tired enough. I woke to one of the sweetest soliloquies I know, the Air Boss giving the “start ‘em up” over the 5-MC announcing system.


“On the flight deck, time to get ready for the first go. Check helmets on and chinstraps fastened, goggles down, sleeves rolled down and flotation vests secure. Check for loose gear about the deck. Stand clear of intakes, exhausts, propeller and rotor arcs. Time to start the go jets, start ‘em up.”


As the huffers began to howl I pulled on my helmet and float coat, did a quick radio check, grabbed my unit one (aid bag), and stepped out onto the roof.


There’s a rhythm to the flight deck. If you’re on your game, completely in tune with the dance, it’s an awesome experience. It’s a bit like being omniscient. Somehow you can sense the totality of activity across the entire deck. It’s a state of acute observation and hyper-vigilance. It’s hard work, but at a core level it’s subconscious and can’t be forced. You’ve either got it or you don’t. When you don’t have it it pays to be exceedingly cautious. On May 3 I didn’t have it, so I positioned myself inboard and forward of the island, aft of El Two, in the area called the Six Pack. From there I had a reasonably good view of all four catapults and could watch for problems.

From my nearby vantage point I had a perfect view and watched as the launch ritual progressed. Flight controls deflected as the pilot exercised stick and rudder pedals. Wings spread, slats and flaps came out, and the hookup man attached the holdback, then the shuttle inched forward into tension. The Shooter signaled for full power, then afterburner. The exhaust nozzles programmed wide open and twin blue flames roared to life, driving back in howling cones of fire and deflecting skyward off the raised jet blast deflector. Final checkers looked hard, then gave thumbs up. The pilot saluted the Shooter, who quickly polled the checkers and made his own final assessment of the jet’s readiness for flight. He turned and lunged forward, outstretched hand touching the deck then pointing down the cat track.


For endless moments the Tomcat roared in zone three burner, straining against the holdback fitting with 40,000 pounds of thrust. In the ICS bubble the cat officer flipped up a switch guard and mashed his thumb down of the firing key. Steam flooded into the catapult and drove the cat pistons forward, breaking the precision machined holdback fitting and dragging the roaring jet down the deck.

About a second into the cat stroke, roughly halfway through the shot, the afterburner on the right engine snuffed out and the nozzle constricted toward the MRT (full “dry” or non-afterburner thrust) setting, then relaxed into trail as the failing engine began to wind down.


Under asymmetric thrust with port engine in afterburner and a dead motor on the right side, the nose of the jet pushed to the right while continuing to pitch up.


Along with every other man who was watching, I willed the nose to come down. Off the cat, full of gas, single engine. If the nose didn’t come down the jet would stall and crash.

Formo was the Commanding Officer of VF-41. He was replaced by Commander Art Cebrowski, who later became CAG. Admiral Cebrowski died in 2005. My Skipper, CDR Ed "Hunyak" Andrews, died a few months ago. My fellow flight deck corpsman Frank VanNoske died two years ago. Sooner or later, it comes to all of us.