So about that 99 percent demographic...
The members of one 99 percent demographic have something in common, something that they might never guess.
Nearly every member of that particular group – the 99 percent of Americans who do not practice production agriculture – are each two or more generations removed from the farm. A century ago, this figure was only about 50 percent. In the middle of the 19th century, non-agrarian Americans made up 10 percent of the population.
There's no shortage of “experts” today to tell you where your food comes from. A lot of them hail from New York City and Los Angeles. Surprised? Most of today's Americans are urbanites and suburbanites living within 100-200 miles of the east and west coasts.
The food experts you’re most likely to hear from are a passionate lot, firm in their convictions. They have a lot of good ideas and pose extremely important questions.
But like a color-blind person looking at a rainbow, they’re missing something fundamental. I can’t teach the experts to see color, but I can share a peek at the rainbow from my perspective. 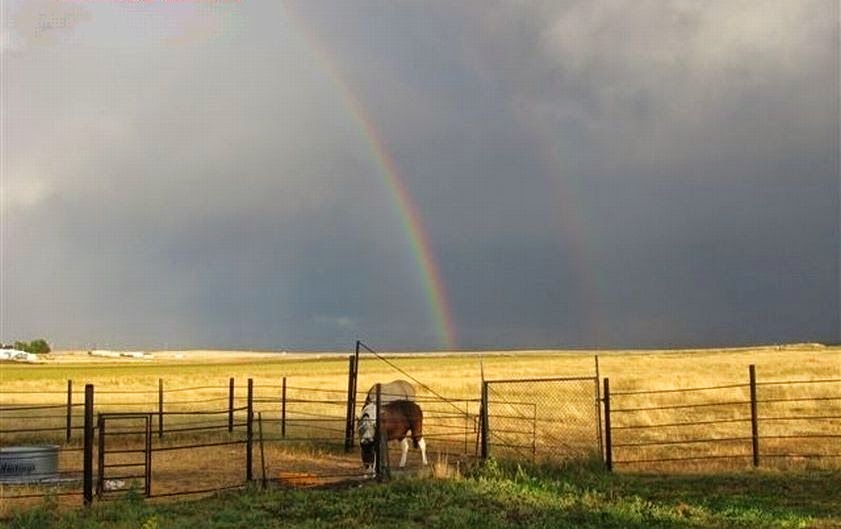 Just for fun, a bit of a fairy tale. Once upon a time on a ranch...

“Looks like that cow’s got a calf coming backward,” said the man as he walked through the back door of the ranch house. “I’m going to have to pull it.”

“That’s just great.” The woman stood near the kitchen sink in a colorful red and green dress, pretty face marred by a deep frown. “What about midnight services? It’s Christmas Eve!”

The rugged man looked at his wife, a pained expression on his face. He started to answer, hesitated, then replied. “It’s only 10 now, like as not we’ll get this calf delivered in plenty of time to get to church.”

“More likely it’ll take hours,” said the woman. “Something always comes up when we have plans!”

The impending argument was cut short by sound of little feet scampering down the stairs and clicking across the polished wooden floor of the living room. A miniature version of the woman, complete to the red and green dress and shiny black shoes, burst into the kitchen in an explosion of sound.

“Daddy! Is that cow having her calf? Can I come with you? I can help you! Please?”

The expressions on the faces of the man and woman eased, and the sting vanished from the air.

“You’re all dressed up for church, sweetheart,” said the man. “You don’t want to miss baby Jesus in the manger, do you?”

“Yeah, but it’s Christmas, Daddy, and we’re havin’ a baby calf and I can help! Please?”

Before the man could answer, the little girl turned to the woman. “Please, Mommy, can I stay an’ help? Can I please?”

“Sweetie,” said the woman, “church is important, especially at Christmas. We have to go. You've seen plenty of calves born and you’ll see a lot more.”

“But Mommy,” said the girl, eyes tearing, “I can really, really he-elp!”

“No more argument,” said the woman, then added, softly, “You can see the calf when we get home. Now run upstairs and wash your face and we’ll go.”

Sniffling a bit, the little girl padded slowly toward the stairway, head down, shoulders hunched and quivering.

The night was inky black and cold. There was no moon, but the cloudless sky was awash with the brilliant pinpricks of stars. As he crunched across frozen snow the man looked up and smiled. He paused for a moment, breath puffing clouds of vapor into the air. Facing south, he picked out Orion, then let his gaze climb until he could see the glowing Milky Way, far overhead and thick with clotted stars.

Christmas in the Holy Land by now, he mused, thoughts nibbling at the corners of the big question.
With a sigh, the man continued along the familiar route, ghost of a smile still on his face. Ahead in the dark sat the old wooden barn, a faint glow coming from four small windows and dimly lighting the path.

In the barn the man eased a young red cow into the doctoring stall and quickly slipped a halter over her ears and secured the lead rope to a stanchion. He stepped into the barn’s “office,” a small corner room, and pulled gloves, calving ropes and disinfectant from a cabinet. The tiny room had a desk and chairs, a small refrigerator, a sink, and cupboards filled with various supplies. He slipped out of his jacket and rolled up his sleeves, then quickly washed his hands and drew a bucket of warm water. Grabbing the supplies, he walked back to the doctoring stall.

The cow was standing quietly in the stall, placidly chewing her cud. Every few minutes she would pause, grunt softly, and begin to strain. As she strained, a pair of tiny hooves, bottoms pointed up, emerged from the birth canal. When she relaxed, the hooves disappeared back inside.

“I’d sure like to know how you got bred four months ahead of your sisters,” said the man. “Okay, easy now girl, let’s see what’s going on here.” He poured some lubricant on his gloved hand and carefully examined the cow. “Ah, good,” he said. “he’s just coming backward. We’ll have your baby out in a jiffy, girl.”

Taking the disinfected calving straps from the bucket of warm water, he deftly secured them above the hock of each protruding foot. “Easy now, girl,” he murmured, “just give us a nice push now.”

As he waited for the cow to begin straining again, he heard the sound of the ranch house door slamming, then the flurry of small feet scampering across the barnyard. “Daddy,” his daughter shouted with delight, “Mom said I can stay an’ help!”

The barn door slammed open and the little girl rushed in, fairly dancing with excitement. Gone were the holiday dress and shiny black shoes. In their place were jeans and shirt, sturdy boots, and a bright red hooded jacket.

She stopped a few steps inside the barn, eyes wide and serious, suddenly remembering to “be calm and quiet” around the cattle. “What should I do?” she asked in a hoarse little whisper.

Smiling, the man pointed toward the office. “First things first, Punkin', go wash and dry your hands. Use the orange soap.”

The girl dashed toward the office, then suddenly remembered "be calm" and tip-toed the rest of the way in an exaggerated “quiet” walk.

“Did Mom go in to church, then?” the man called toward the office door.

“I think so,” she replied, voice muffled by the sound of running water. “She said to help but to be quiet an’ don’t get in the way.” The girl emerged from the office, wiping wet hands on her jacket. She took in the scene with big eyes and hesitated, unsure about coming closer.

“Go ahead and take off your coat,” said the man, “it’s warm enough in here. Just put it on that straw bale and come over here beside me.”

With his daughter beside him and watching intently, the man explained what they were about to do. “Calves usually come out head first,” he said, “but this one’s coming backward. His head will be the last thing to come out, and he won’t be able to breathe until he’s completely born, so we have to get him out pretty quick.”

“Can he breathe now?,” asked the girl, face filled with concern.

“Yep,” said the man, “his umbilical cord, his belly button cord, is still hooked up, and he’s breathing through that. But it’ll come unhooked as he comes out.”

“You can tell by his feet,” said the man. “See how the bottom of his hooves are pointing up? If he was coming out frontward, and those were his front feet, the bottoms would point down toward the ground. He’s kinda laying in there on his tummy, with his head and front legs stretched out in front of him, and his back legs stretched out behind him, and these are his back feet.”

“We sure are,” said the man as he grasped the straps dangling from the hock of each small foot.

“Now you get over here on my right side and grab the straps. Hold ‘em just like I am. We’ll just wait here for a minute until she starts pushing again.”

In a moment the cow squatted down a bit and began to strain. “Okay, start pulling.” Father and daughter pulled and the calf’s legs began to emerge from the birth canal. The cow grunted, bore down, and began to shift her hips to the left. “If she starts to get wild you jump back quick, okay?” said the man.

“Okay,” said the girl, grimacing with effort. “This is hard!”

Slowly, inch by inch, the calf began to emerge. Pulling more down than back, father and daughter kept a strong, steady tension on the ropes. Soon the calf’s hips emerged, and then with a rush, the rest of it’s body slid out and landed in the soft, dry straw. 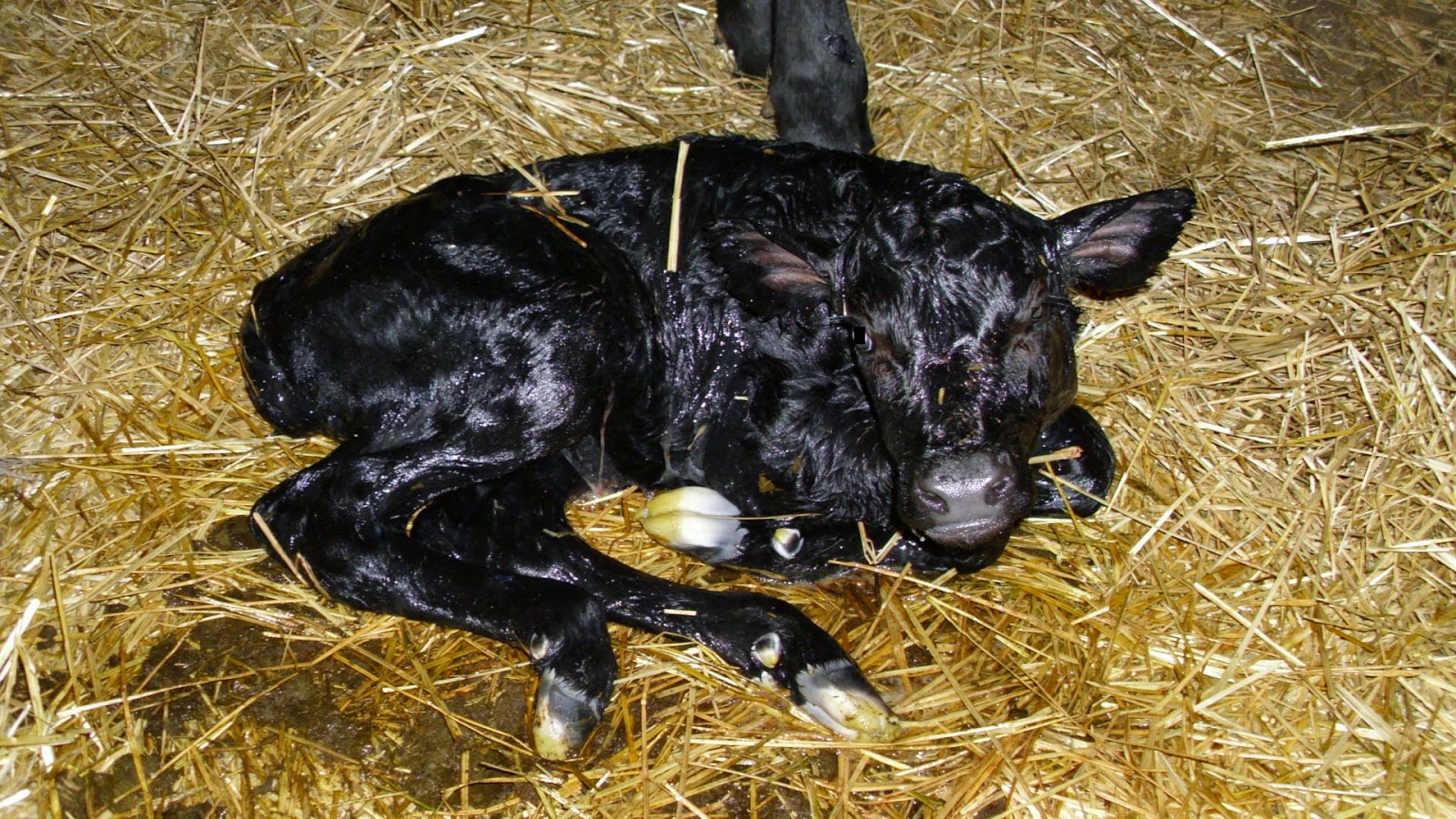 “There we go,” said the man. The calf lay still for a moment, steam gently rising from its wet, slippery coat. In a moment it began to move its legs. “Okay, let’s pull him over here, out of the stall,” said the man. Father and daughter re-positioned the calf and the man scooped up some straw and began rubbing it down. The girl hesitated for a moment, then grabbed handfuls of straw and started rubbing the new, wet bundle of life.

The calf quickly became more lively, struggling to gather its long legs together and to raise its head.

“Why, Daddy?” asked the girl, eyes wide and sparkling with curiosity.

“See how she’s black and white?” asked the man, “do we have any cows that look like that?”

“Nooo,” said the girl, wonder in her voice.

“Can you think of anyone around here with black and white cows?”

The girl thought for a moment, lines of concentration etched across her forehead. “Miss Mabel,” she gasped. “Miss Mabel’s cows are all black and white!”

“That’s right,” said the man, “and I think this calf’s daddy is Miss Mabel’s bull. What do you think of that?”

Chuckling quietly, the man stood up, business brain considering the sale prospects of a half-Holstein calf. Then he glanced at the little girl, his heart captured by the delight and wonder written on her face. With a start of surprise, he realized the girl was right.

The calf had gained control of her legs and was trying to stand. “Okay, sweetie,” said the man, “let’s let the cow see her new baby. Go on over and sit on the straw bale.”

Released from the halter, the cow turned and began snuffling, then vigorously licking, her new calf. Father and daughter sat a few feet away on the straw, watching quietly. The smiling satisfaction on the girl’s face was mirrored in her father’s. 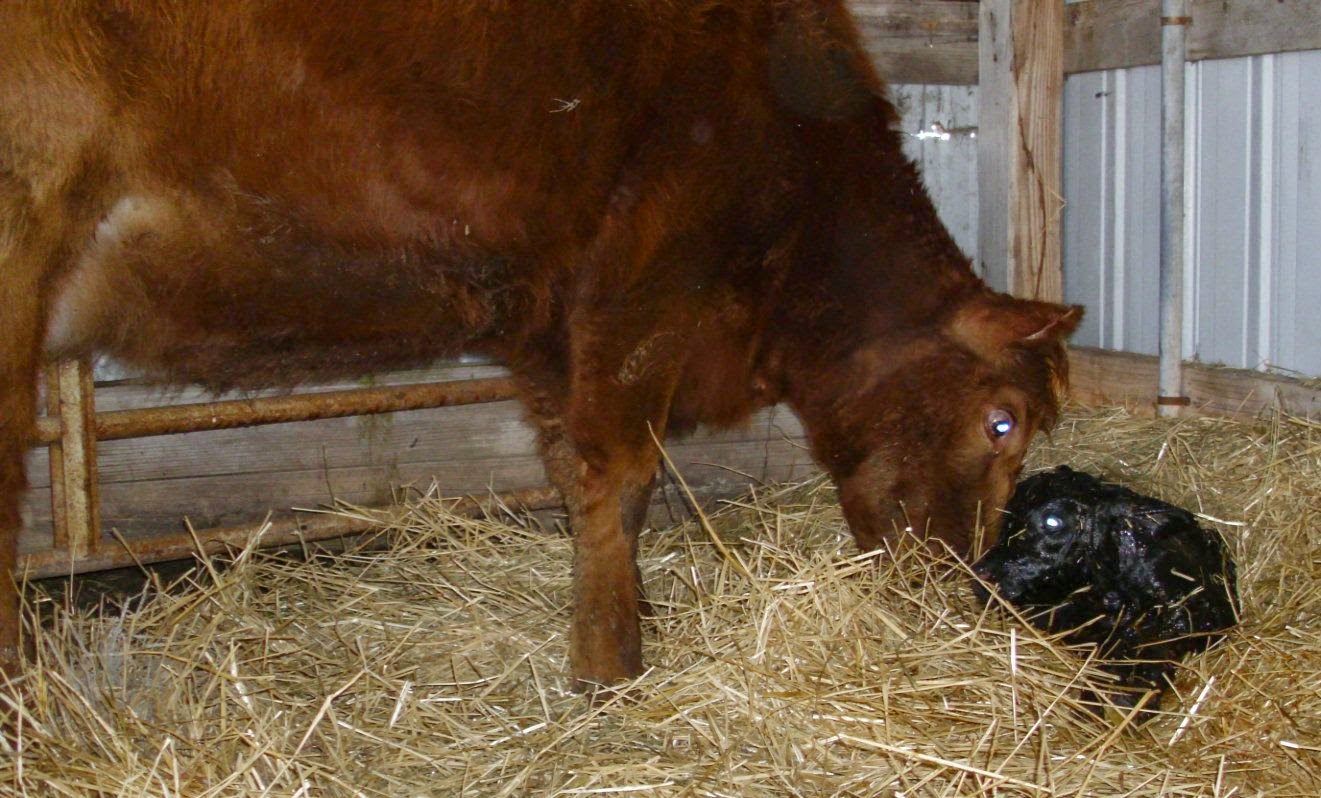 The man turned at the sound of the barn door softly closing. The woman stood there gently smiling, dressed in work clothes and holding a thermos and three cups.

“You two cow doctors look like you could use some hot chocolate,” she said.

The girl jumped off the straw bale and dashed toward her mother.

With the cow gently licking and nudging, the new calf tottered to her feet, then wobbled instinctively toward the udder and its life-giving milk.

From their bench on the straw bale, mother, daughter and father watched, sipping steaming cups of hot chocolate in a stable filled with miracles.

Outside, in the calm, silent night, the stars shone down with soft brilliance.


Posted by PrairieAdventure at 4:28 PM