A word about the image at the top of this blog, which Blogger tells me is properly called a "header image." If I understand it correctly. You can click on this one to enlarge. 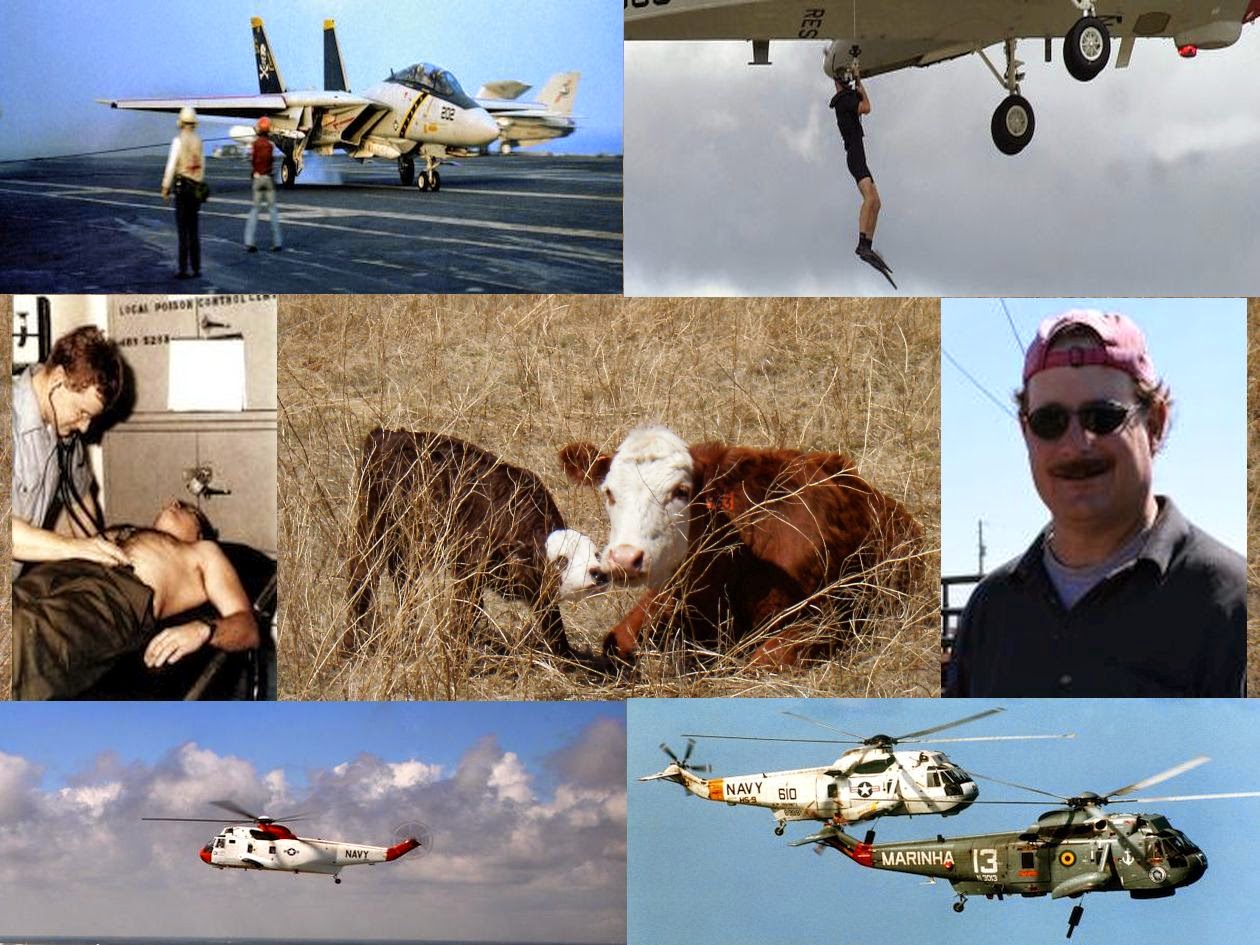 In the center of the image is a cow (ol' 963) and her hours-old calf. This is what I do, or is at least it's the thing that allows me to do almost all of the things I do. I'm a rancher, a commercial cow-calf operator. Which means that I have a ranch and a herd of cows. The cows eat the grass that grows on the ranch. The grass feeds them and allows them to make baby cows, or calves, every spring. I take the calves to the sale barn and trade them to cattle buyers for cash.

At top left is a picture of an F-14A from VF-84 landing on USS Nimitz. I'm the corpsman standing there at the left with my thumb up my backside. I got yelled at for standing there. I was the squadron corpsman for VF-84 in the late-70's/early-80's. I worked on the "roof" as well as down in sick call. I also flew with the Airwing's helo squadron, HS-9.

At top right is an image of a rescue swimmer "on the hook" beneath one of NAS Oceana's Sikorsky SH-3G Sea King SAR helos. The swimmer is not me, he's far too skinny and far too young. The picture was taken in the early 1990's, after my time at Oceana had passed. I've got hours in that helo though, and I spent time on that hook.

At bottom left is AD-635, the same helo as above, taken at about the same time. Oceana SAR's call sign was Deliverance. Which was pretty cool. Flying station SAR was mostly a blast, though at times it could be quite grim and even a bit risky.

At bottom right is a mistake. This is what happens when you trust wickipedia, which described the carrier as USS Nimitz. I focused on the F-8 Crusader with the Alpha Juliet tail code, thinking that it was a VFP-63 photo bird, which still flew from Nimitz in my early days with the Jolly Rogers. However, it's not a photo bird, it's a straight fighter, probably an F-8E. And the carrier is a 27-Charlie, fercrissakes. I gooned it. I'll fix it.

Fixed it. The picture anyway.

At bottom right is a Brazilian Navy SH-3D flanked by a US Navy SH-3H. Both ASW helos are trailing dipping sonar. This picture is dated 1987 and is a couple of years after I left VF-84. I'd have to dig out an old log book to check for certain, but there's a very good chance I've got hours in the HS-9 helo. In 1987 I was with VA-65, part of CVW-13, and deployed in Coral Sea (CV-43) to the Mediterranean.

Center left is me, pretending to do sick call for a cruise book photog. Man I was young.

Center right is me also, older and fatter and in the middle of weaning calves.

I've still got to fix the font for the blog name and description. I'll get to it.

Hopefully the header image will give an idea of what you will find in the blog posts.
Posted by PrairieAdventure at 5:13 PM