One of the reasons I like giving ranch tours is that for the vast majority of my fellows, food production remains a great mystery.


Sure, we all learned about farming in elementary school, then learned something about the science of farming in jr. high, and maybe even more of the science in high school.


Um, my niece tells me it's middle school. Not jr. high. And it should be capitalized. Middle School.


So. Where was I? Oh yeah. Nearly all of us Americans learn stuff about farming in school. And most of us occasionally watch television programs, some of which are billed as educational, about farming. We also read propaganda insightful, informative farming and ranching articles and essays in books, magazines and newspapers.


Also, much of the propaganda insightful and informative farming and ranching stories we read, listen to, and watch in the media is, shall we say, less than complete. And sad to say, some things taught is school these days are rather questionable. I've seldom had tour guests who didn't have questions and concerns about GMO’s, Roundup, herbicides and pesticides, hormones, antibiotics, E. coli, pink slime, animal rights, etc.

If you cast your gaze over to the right and toward the top, you'll see a poll regarding concerns about food. Feel free to vote!


In my experience, people visiting my ranch seem to enjoy the opportunity to discuss these concerns. Nearly all of them listen closely to my answers and ask good follow up questions. When they leave, they seem to have a bit less anxiety about their food and where it comes from.


The learning experience is great, but there should be fun, too. And what’s more fun than feeding bottle calves? What’s more preciously photogenic than little Bobby and Susie and the slobberingly insistent little bovine? 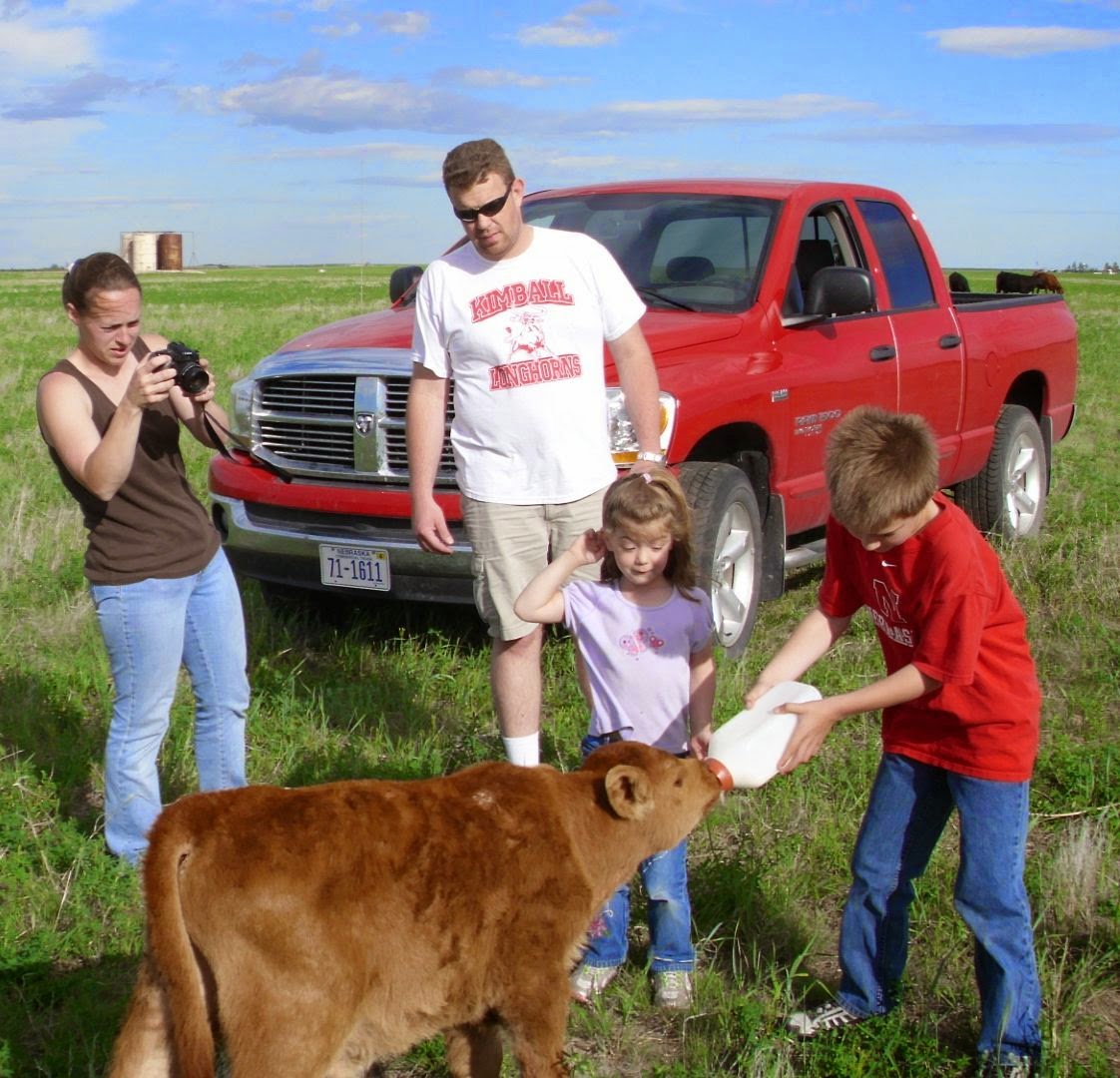 To that end I’m trying to put together an exhibit slash bottle calf feeding experience at our local Visitors Center, which happens to adjoin our ranch at Exit 20 on the mighty I-80. If it works out, it’ll bring together the Visitors Center and their local advisory committee, city and county government, the local high school FFA/agriculture program, and the local Farmers’ Day committee. Adding stakeholders (particularly government stakeholders) adds, well, complications. And much of my hair is already missing (Stakeholders: IKBIL!). Still, there seems to be lots of upside here, for visitors and locals. We’ll see how it goes.


And now for a completely different complication…


Cattle need food and water. In this part of the country, and in particular on my ranch, there’s usually enough of the former available. The prairie is grass, after all, and grass is cow food. There is, however, very little surface water. Water is not optional -- without it the cattle die.


So we clever ranchers drill down into the ground and pump water from the Ogallala Aquifer into stock tanks from which the cattle drink. On our ranch many of the stock tanks come equipped with a float and valve assembly which regulates filling of the tanks. When the water level drops, so does the float, which allows a float arm to pivot and open the water supply valve on the bottom of the tank. When the water level rises the float lifts the float arm and shuts the valve. See? Clever! Sometimes there is a little spillage, but it’s all good. 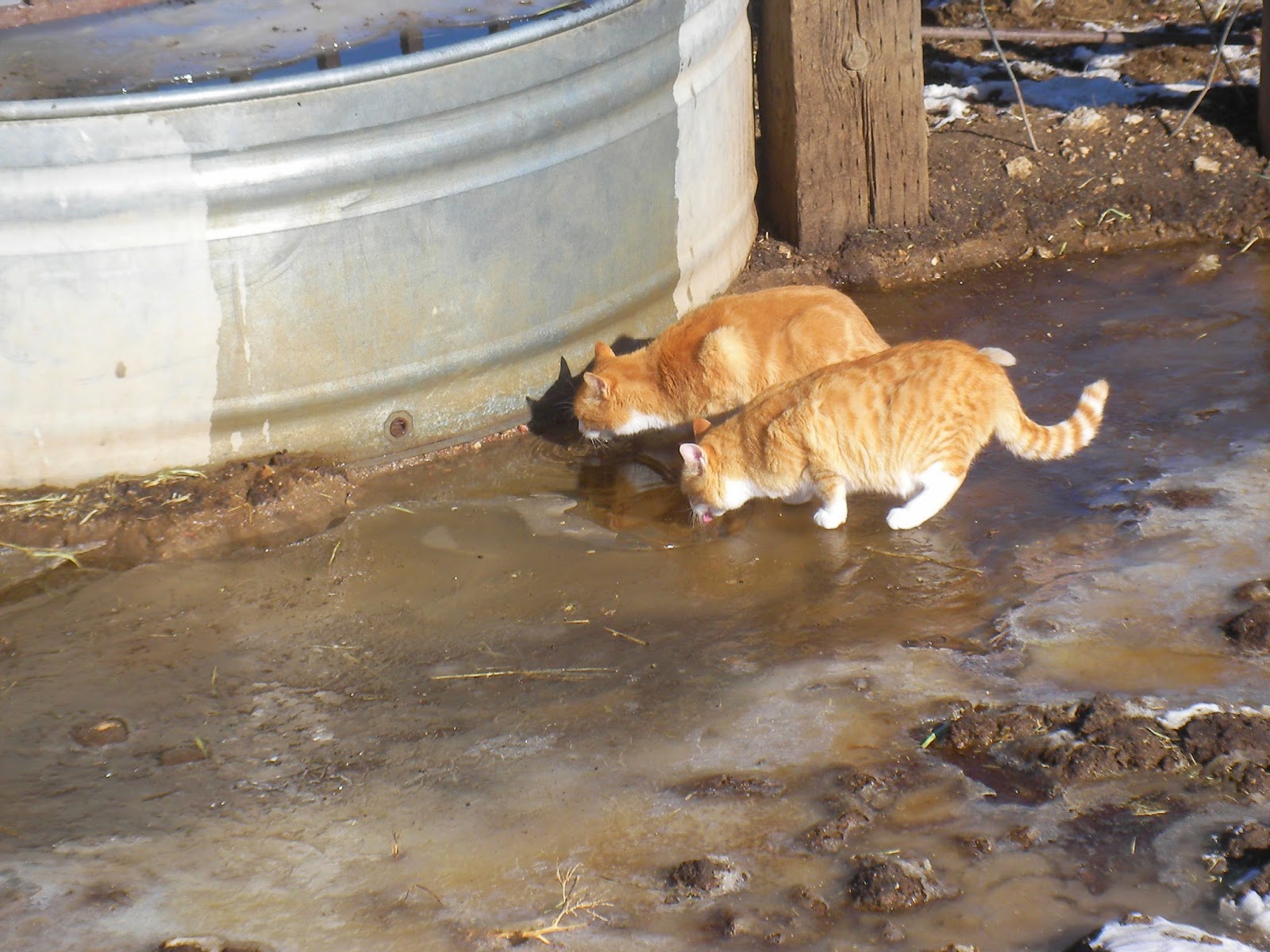 When the temperature drops below freezing in the winter, however, ice forms in the tank and, well, complicates things. Cattle can’t drink ice. So ranchers have to chop holes in the ice so the cattle can reach the liquid water beneath the ice, which forms, of course, on the surface of the water. The ice can also capture the tank float, holding it fast and preventing the valve from opening to refill the tank.


So clever ranchers also chop the float free of the grasping ice.

Some ranchers, unfortunately, are more clever than precise.

Me: "I gotta fix the float in that tank in the hay meadow."

Me, with head hanging: "Yessir."

Boss: Patented double move. Eyeroll and headshake. Not many can pull this one off. "Okay."


Posted by PrairieAdventure at 3:54 PM