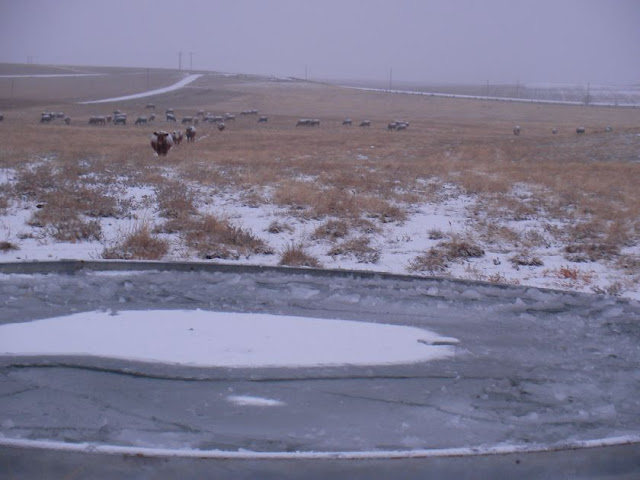 I stand at the northwest corner of the pasture and face the rising sun. It’s cold out but the wind is light and at my back and the sun feels good on my face. As I breathe, exhalations of warm, moist air puff into momentary clouds of vapor and glow briefly in the dawn’s early light before dissipating on the breeze.

The pasture glows softly in the slanted morning sun. It’s a gorgeous panorama; ice crystals in the scattered thin snow sparkle brilliantly like diamonds as shortgrass takes on a golden illuminated glow and becomes, at least for a time, a noble carpet fit for royal feet to tread upon.

The sun comes as late this morning as it will come all year, for today marks the winter solstice. Although the Earth is as close to the sun in its elliptical orbit as it will be all year, the northern hemisphere is leaning far over in the planet’s axial tilt. From our perspective, the sun has been moving south since June’s summer solstice, days slowly getting shorter and nights longer. Finally at the end of that long southern march, today will feature the shortest period of daylight and longest night of the year. It’s the first day of winter, and tomorrow the sun will begin to move north again, promising a new spring and the return of life to this frigid landscape.

There’s still life here, of course. The cows are at the far end of the pasture, a full mile to the south. From my vantage point I see them as scattered dots, moving slowly across the prairie and casting long shadows away from the sunrise. “Pretty as a picture,” I think, so I quickly snap one with my trusty and rugged digital camera. My pictures never capture the entirety of the subject, but they catch part of it, and I keep taking them.

In a continuing morning ritual, I test the electric fence before dropping the gate. Tester terminal to wire, ground lead to steel post, and voila – five strongly flashing diodes. The fencer is sending 5,000 volt pulses around the pasture. That’ll keep ‘em in – so long as they’re finding enough to eat.

And finding enough they are. This pasture was idled during the growing season and is rank with dry, cured grass and sedge. There’s still a lot of green in the pasture too, low down and near the ground. Though we’ve had some sub-zero temperatures and it’s now winter by the calendar, the hardy shortgrass prairie is still very much alive and hale. There’ll likely be green growth here throughout the winter.

The north stock tank is frozen over with a thick rind of hard, white ice. If this pasture was larger and used more extensively in the winter, it would pay to install propane tank heaters. But it’s not, and the conservative frugality of a successful operation dictates a manual option for making water available to the cows. I take up my maul and begin chopping. Ten minutes of vigorous lumberjacking gets the job done. It’s a good workout, and the 8-inch thick ice yields only grudgingly, but eventually I manage to hack out and clear a large hole. The cows hear the commotion of my labor and begin drifting my way for a drink of cool water. They don’t use as much water in the winter, but that doesn’t mean they don’t need to drink every day. Chopping ice is a least favorite task, but it’s arguably the most important job of the cold season.

The south tank is frozen over too, of course. Axe work soon opens it for drinking as well, though I may have to do a bit more copping this evening as the cows return. This tank was a challenge last week when a stiff north wind drove minus 15 degree air down an under-tank rabbit burrow and froze the inlet pipe. Pesky (or something like that) rabbits. A propane torch eventually thawed the frozen pipe but not without a serious struggle, nor without making me wonder if the battle were a losing one.

My brother, prompted by the whining e-mail complaints I was sending out, reminded me that Thoreau (Henry David, of course) had a number of interesting things to say about winter and ice. Thumbing through my well-worn edition of “Walden,” I soon found the place, chapter 16, “The Pond in Winter.”

“…I cut my way first through a foot of snow, and then a foot of ice, and open a window under my feet, where…a perennial waveless serenity reigns as in the amber twilight sky. Heaven is under our feet as well as over our heads.”

There are moments when the realization of my immense good fortune bursts to the fore and nearly drops me to my knees with gratitude. A frigid winter solstice, a frozen stock tank, and a loving, chiding brotherly reminder provide such a moment. Here’s hoping that each of you kind readers will be similarly blessed in the coming year.
Posted by PrairieAdventure at 9:46 AM