What can YOU do?


We all know what Memorial Day is, right?


It’s the first day of summer, according to the rocket surgeons in major media, and one of the 15-25 or so days of the year that most government employees, bank employees, and selected others get paid to stay home to burn meat and drink beer.


Since it’s a paid holiday, some may wonder what the celebration is all about. What does it represent?


Something about dead people I think.
Anyway, here are a couple of points to ponder.


The other day I had a conversation with a local person who told me that it was their right to have people die for them. “I expect people in the military to die for me,” this person said, “that’s what they get paid for and it’s my civil right. It’s in the Bill of Rights, “Freedom from Fear and Worry.” (Some slight confusion there with FDR’s notion about government guaranteed freedoms).


So, to cut to the chase, they were both utterly wrong.


In the first case, let’s think it through from the first founding principles of America. “We hold these truths to be self evident, that all men are created equal, that they are endowed by their creator with certain unalienable rights, that among these are life, liberty and the pursuit of happiness.”


No one is better than another, no one is worse. We are all fundamentally human. And not just human, each of us is a sovereign human being, independent and the master of our own lives. None of us are slaves, and none of us are slave owners.


Nor are we owned by the government. The very next sentence has this to say: “That to secure these rights, governments are instituted among men, deriving their just powers from the consent of the governed.” 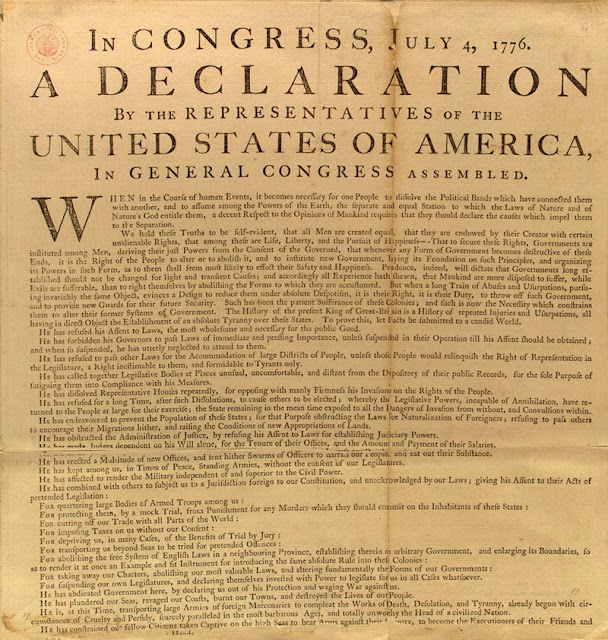 Given the above, how can anyone believe that they have the right to have others die for them for any reason, let alone to shield them from fear and worry?


This being the case, I find it hard to be judgmental. The person is misguided, and in my opinion has been used shabbily by the education system and the popular ideological mainstream narrative. Life is going to be unnecessarily hard for this person as they struggle with learning about reality and the universal truths our nation was founded on.


My veteran friend is another matter. I’m quite cross with him and quite -- irritated -- by his attitude. Sure, he served in the military, and that’s a wonderful thing. But it’s not the only thing. Where does he think his pay, clothing, food, equipment, and everything else he touched or used in the Army came from? And does he think that having served two years in the military that he’s done with serving his country, done with working hard to be an American?


This nation is not the united states of the military. It is the United States of America. We are all sovereign citizens. None of us are better or worse than our fellows. We all play vital and important roles. The neurosurgeon is every bit as good as the ditch digger. These truths are described in the Declaration of Independence and guaranteed by the Constitution of the United States of America.


My veteran friend seems to have forgotten this. I wonder if he remembers the oath he swore when he joined the Army?


I wonder if he remembers that the oath of enlistment has no expiration date?


There would be no military if the sovereign citizens of this nation did not provide for it. It’s become quite popular to “thank a vet” these days, but in my view it should be equally popular for veterans to thank their civilian fellows, not only for funding and supplying the military, but for granting us veterans the opportunity to serve our nation in the military capacity.


Back to Memorial Day. Despite my rather tongue-in-cheek statements at the beginning of this piece, most Americans know perfectly well that Memorial Day is a day set aside to honor the sacrifice of those who fell in military service.


Whether Americans take the opportunity to do so is up each individual. We’re all sovereign citizens. We can’t be compelled by the government or by our fellows to yield such honor. As free men and women, we make our own choice in the matter. Period.


Now if you’ve read this far you might agree with me that the United States of America is an extraordinary place, and that to be a citizen of this great nation is perhaps the greatest boon any human can have.


You might also be frustrated and worried about the state of our nation; apathetic and selfish people, overreaching government bureaucracies, the erosion of civil liberties, the encouragement of selfishness and the discouragement of selflessness. You might be wondering, “what can I do about the mess our country is in?”


In short, you might be asking yourself, “what can I do about how messed up all these other people are?”


The best answer is the simplest answer. Do what’s on your own plate first. To paraphrase scripture, don’t worry about the speck in your neighbor’s eye until you’ve removed the rock from your own eye. In other words, be the best human being you can be. When you’ve got that mastered, then you can branch out. And when you’re ready to branch out, you’ll find that the key is to lead rather than to compel. Leadership is 99 percent example, and only one percent direction. If you do it right, when you’re ready to branch out and start fixing the mess, you’ll find that you accidentally began leading somewhere along the line.


The point isn’t to fix all the problems of society. In a land of sovereign citizens, the land of e pluribus unum, our job is to be the best Americans we can be, and to treat our fellow sovereign humans the way we wish to be treated. A equals, not as “them,” not as “the other side.” Not as helpless victims, nor as superior or special. Not as “the problem,” but as the precious human beings they are.


The problems of American society will only be fixed by sovereign Americans, the many become one, Americans living principled lives based on the natural truths of our national founding.


Since we’re talking about Memorial Day...


Fred Lincoln Hewitt, III was 76 when he passed away on May 14. Fred was born September 25, 1938 in Buffalo, New York. He graduated from The Pingry School in 1956 and from Hamilton College in 1960. After graduating from college he joined the navy via the Naval Officer Candidate School in Rhode Island.


Initially he served in the Guided Missile Cruiser USS Boston, followed by a stint as an instructor at NOCS. His next assignment was flight training at Pensacola, Florida. Fred had been due to get out of the navy, but decided to stay in after thinking about President Kennedy's famous speech "Ask not what your country can do for you. Ask what you can do for your country."


At that time he did not know if he would make the Navy a career, but he felt he could "give more years to his country." Later on he survived 205 missions over North Vietnam in the Grumman A-6 Intruder and had 352 carrier landings. He served in A-6 squadrons VA-42, VA-85, VA-75 and VA-34. Fred was awarded the Silver Star, two Distinguished Flying Crosses and 16 Air Medals.
After 13 years, Fred decided to leave the Navy in order to spend more time with his family. From 1973 through retirement, he served as a high school Athletic Director, history teacher and ice hockey coach, both here in the states and overseas.


Fred married and had a family. He leaves behind a wife of 53 years, four daughters, and eight grandchildren. He also leaves behind the legacy of a sovereign American citizen who lived a great American life. There simply weren’t many days in Fred’s life when he wasn’t leading by example, making a difference, serving his nation and humanity as a whole.


So on Memorial Day, if you’re so inclined, think about and honor the sacrifice of those who fell in service to America.


Posted by PrairieAdventure at 4:09 PM