The phone rang in the middle of the night.

I hate it when the phone rings in the middle of the night. It’s never good news. It’s almost always less than good news, except for those rare occasions when it’s a wrong number. Wrong numbers are kind of neutral. Very occasionally (knock wood) it’s terrible news.
The middle-of-the-night telephone ring always surprises me, always sends my heart into my throat, always makes the blood pound in my ears. Because it’s just never good news. I mean, seriously, who’s gonna call me at zero-dark with good news? The Nobel Prize Committee?

Funny I should mention that. When Dick Feynman won the 1965 Physics prize (shared with Julian Schwinger and Sin-Itiro Tomonaga) for his work in Quantum Electrodynamics, the Nobel Committee woke him with the news in a post-midnight long distance phone call.
But I am not Richard Feynman, nor a physicist, nor in the running for any award at all, let alone the Nobel Prize.

So jangling phone, heart in throat, pounding blood -- not gonna be good news.

“Shaun Evertson,” I say. That’s how I answer the phone. Bad habit I picked up in the service.

“This is the Sheriff’s Office. Do you have cattle x miles south along Highway x? We got a lady hit one and totaled her car.”

Groan. Quick mental calculation. My cattle aren’t anywhere near that location, but could they be? Probably not, it would be a five-mile hike, but you never know. The Sheriff’s Office isn’t always accurate when reporting locations, either. Sigh.

“My cattle are west of there. If I understand where you’re talking about, the cows on that section along the highway belong to Mr. QRS and the land belongs to Mrs. XYZ.”

I snap on the light and crawl out of bed. I used to be able to jump out of bed. Probably still can in an emergency. But if there’s no incoming, no smoke or flames, and no flooding, it’s gonna be slow and accompanied by a bit of groaning.

Without the pills, booze and marijuana, of course.

No, I’m not a former NFL player. I did, however, suffer a couple or three major traumas during my years of naviating. A shoulder and an ankle are as much metal and scar tissue as anything else. I no longer have a complete “as issued” set of, well, stuff. And my lumbar spine didn’t emerge unscathed from that exceptionally hard landing in a Dare county swamp.

Parts of me don’t like to get out of bed.

The groans are spiced with a bit of rather sharply pointed grumbling.

“Stupid blankety-blank women drivers from Colorado...probably goin’ like a dingbat outa’ hell with a trunk full of medicinal reefer…”

I know, I know. The reefer shot is a cheap shot. Still, it’s the Rocky Mountain Zeitgeist, baby.

In my mind’s eye I picture a distraught woman weeping alongside a silverish SUV, runnels of tear-melted mascara dripping from her chin as she surveys the smashed front of her vehicle. From the inky darkness of the roadside ditch comes the sound of labored, bloody breathing and vocalized bovine pain.

Does that kind of early morning grumbling make me a horrible person? Certainly by today’s standards of robust professional victimhood it does. Ah well.

I roll south down an unpaved county road just after the clock strikes one. Zero-one-hundred. It’s after midnight and as the old saying goes, nothing good ever happens after midnight.

As with most such comprehensive and authoritative sayings, there are, um, exceptions to the rule.

The night is pure magic. The evening air of the South Divide is cool and bracing, a perfect 57 degrees only a few short hours after the sweltering heat of the last day of July. I drive with the windows down and the air flowing through the pickup cab is sweet and pure as nectar. Ambrosia laden with the scent of summer grass and sweetclover and incipient dust and shortgrass prairie live and in person.

Framed near the center-top of the windshield is the second full moon of July, the elusive but not-so-rare Blue Moon. It’s huge and hard-white and seemingly close enough to reach out and touch. I can easily make out the Sea of Tranquility and the landing site of Apollo 11. Neil and Buzz walked there only a few short years ago in July, 1969. I remember it as if it was just last week. 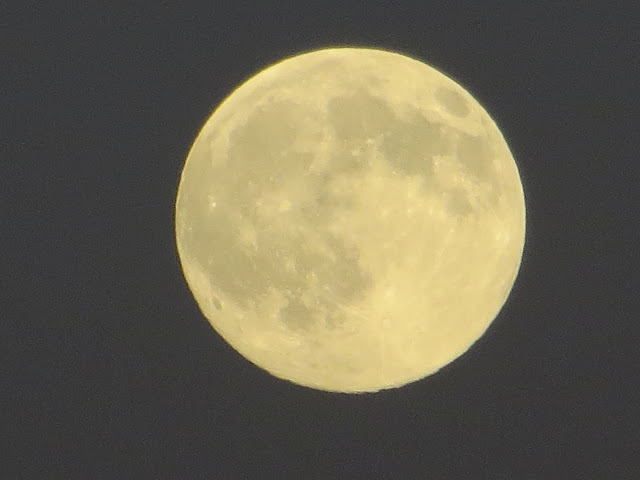 With abundant moonshine present, I can see with great acuity. On a self made dare I switch off the headlights and notice only a little bit of difference. I charge lightless down the county road with the complete confidence of near-daylight vision. Behind me streams an expanding trail of county road dust glowing silver in the grace of the moon’s smile.


It’s an enchanting, intoxicating passage. I could sit here at the keyboard for days and never, ever come up with enough of the right words to do the magic justice. I’ve been extraordinarily blessed throughout my life to have seen and done the most breathtakingly majestic and wonderful things. This Blue Moon night is one of them, fully the equal of a Pacific sunrise or an Atlantic sunset, full-burner nighttime cat shots, water works from the back of a Sea King, baby calves and baby people and blissful “kiss the bride” moments.


Creaking pain washes away as if it had never been, pointed grumbling gives way to thankful appreciation. Good lord, this is what life’s all about! To exist and experience, to grab the world by the heart and let the essence of everything flow like a river through your soul, to play all the play from the day, leaving not a smidgen unused. “It ain’t dyin I’m talkin’ about,” said Gus McCrae, “It’s livin’!”


The price of admission is no price at all. Well, no price for me, anyway. The nice lady who made it all possible has paid a steep price, though (hope she’s okay!), and the cow has most likely paid out everything she had.
I near an intersection and turn east, toward the highway. I can see the pulsing glow of flashing emergency lights ahead. I flip my headlights back on and drive lawfully; there are lawpersons ahead.


As I near the highway I take in the scene. A silvery SUV is crumpled in the northbound lane in a puddle of coolant and shattered plastic. I spot bovine skid marks on the asphalt, I’ve seen ‘em before. They end in a puddle of blood dribbling off into the darkness of the ditch. There’s a flash and a bang down there and after a few moments a deputy emerges, having given the shattered animal her ease.


Alongside the SUV a young woman weeps. She’s no more than 21 or 22, and there’s no mascara marring her pretty face. She’s unhurt, thank goodness, and weeping, I’d judge, from the close call, the totalled vehicle, and yes, from the death of the cow. Life is, well, life, and her trail now includes this event. It’s nothing at all to most folks, and “just one of those things” to many, but it’s a very big something to her. She’s got lots of ups and downs ahead of her, and this thing will fade in time, probably sooner rather than later, but it’ll always be a part of her now. I silently wish her luck and well.


I wander over to the deputy who administered the coup de grâce. I know and like him, we’re fellow cold war vets. He confirms that the cow belongs to Mr. QRS.


I thank him and I mean it sincerely. “The girl’s okay?”


“Yeah, just shook up. Car’s totaled though. She’s lucky she was driving that thing and not a Prius.”


By 2 a.m. I’m home again and crawling back into bed. My day will start (for the second time) in three hours, and I need my beauty sleep to face a never-ending list of chores.

What a glorious night. Thank you Lord. My cup for darn sure runneth over.


Posted by PrairieAdventure at 9:06 PM