It was mid-afternoon on a lovely spring day and I was checking cows.

The cows were scattered across the southeast eighth-section of the northwest quarter, grazing along and turning new grass into bovine flesh, bone and sinew. The herd is within only a few days of the onset of parturition, and much of their nutritional intake is being used to put the finishing touches on the babies that will be joining us momentarily.

As I walked among the cows I was swimming through the kind of sensory delight you only ever find in the early days of spring. Around me the prairie was wakening. The sun's warmth was driving transpiration and the air was heavy with the scent of growing plants, decomposing organic matter, fresh green grass manure, and the tang of melting snow. Birdsong was everywhere, and dominated by the lusty springtime trilling of the Western Meadowlark. Scampering here and there, busily breaking winter-fast and putting their houses in order, Thirteen-Lined Ground Squirrels were out and about, certain proof that spring has really arrived.

As I strode along with a song in my heart and a smile on my face I became aware of a new presence. I felt it before I heard it, a syncopated thumping that was felt long before it was heard. I turned and scanned to the northeast. There! Just above the horizon. A November model Huey. Almost certainly an Air Force bird from the 90th Missile Wing at Warren, out patrolling the Minuteman III facilities scattered across this part of the world.

These Huey's often work in pairs, and I could hear a second one out there somewhere. Finally I found him, holding high as his playmate skimmed low along the Interstate. I watched as they joined up and turned toward KIBM, not much more than a stone's throw from my present location.

As some of you know, I messed this post up by hitting publish when I meant to hit save. As usual in this kind of event, I should have just kept my firetrucking hands inside the firetrucking ride.

I tried to fix it in place, but that worked out about as well as trying to hit save.

Some of us should probably required to have adult supervision when we're driving on the interwebs.

Okay. Mea culpa, mea maxima culpa. Ubi nunc sum? Oh yeah. So there I was, heading on over to the local air patch to grab some pics of a pair of USAF Hueys. I bid the cows adieu and navigated my way out of the pasture, up the lane, and onto the county road. I stopped by the roadside mailbox to pick up the day’s delivery. As I crunched across the graveled road I heard it.


It was an airplane sound for certain, coming from somewhere high and to the west, but it was not a modern aviation sound. Not at all. It was the sound of a reciprocating engine, but very different than the noise made by today’s more-or-less modern, horizontally opposed four- and six-cylinder aero engines. Nor was it the snappy roar of a radial engine. I’d heard the sound before, but not often, and always at airshows. It sounded like a heavy duty sewing machine, clattering loudly through the sky. A grin of delight formed on my face before I even saw the aircraft.

There, rolling in from high key toward the approach end of the northwest-southeast runway, was a vision from the past. Deep blue body, bright yellow wings and tailplane, and an improbably large, red and white horizontally striped rudder. Two tandem open cockpits, fixed landing gear. “US ARMY” in bold black lettering on the wings, along with the pre-1943 American roundel of a white star on a blue circle with a smaller, red circle in the center. 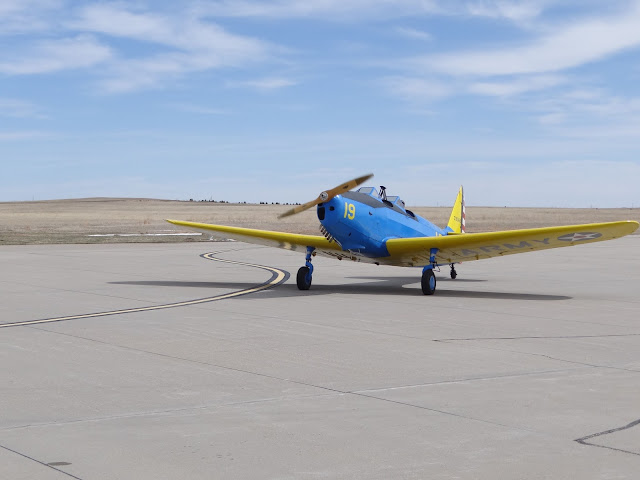 On the nose, just in front of the Ranger (that's where I came up with the former, lame post title) L440-3, six cylinder, air-cooled, inline engine, spun a fixed-pitch wooden Sensenich Bros. propeller. The wooden prop added a waspish snapping sound to the powerful sewing machine clatter of the 200 hp engine. 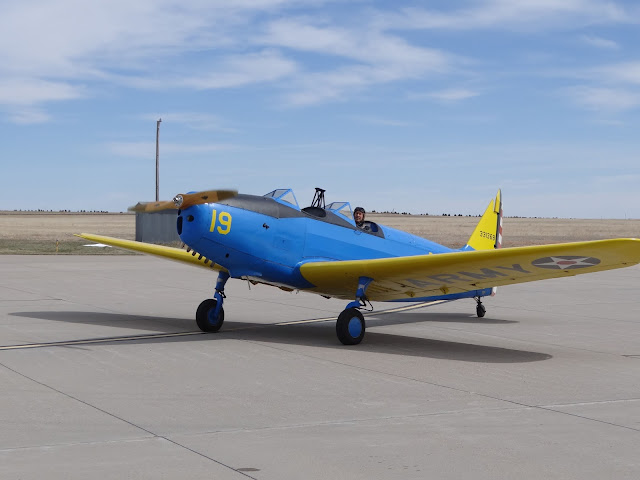 I was absolutely Gobsmacked. She was a dream. And she was a Fairchild PT-19A “Cornell” primary trainer. She floated in “over the fence” in a seemingly impossible attitude, nose buried and yet wafting along slow as molasses. And she was landing downwind! My heart caught in my throat for a moment, but she was rock steady and completely under control. Moments later she flared and her tires kissed the concrete runway in a perfect three-point attitude. She rolled a bit and turned off onto the taxiway. I slapped myself back into action and dashed back to my pickup, mail forgotten for the moment. As was my plan to take pictures of the Air Force helicopters. Helicopters? Sniff. Ceci pour vos hélicoptères! 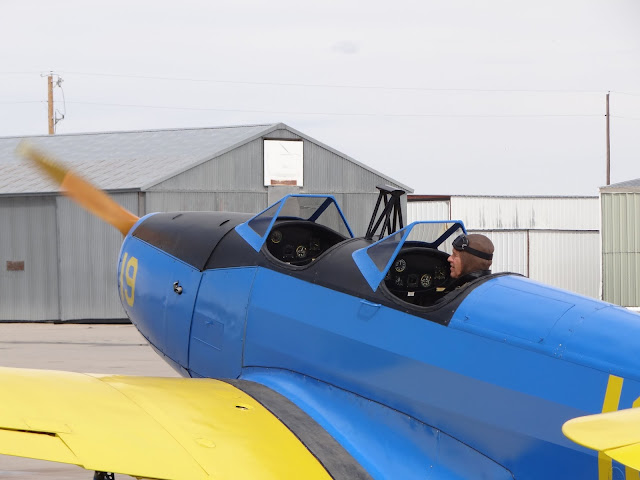 The next half-hour was pure delight. I was surprised and pleased to find that the beautiful little trainer belongs to a local pilot. As I visited with him and asked questions, he told me that it was the plan his Dad taught him to fly in, and the same one his Dad -- A WWII USAAF pilot -- had made his last flight in at age 94. The plane had been manufactured in 1943, and countless Army Air Corps/Force flight students had learned to fly in it during the war. The local pilot had brought the plane to Kimball to have an annual airworthiness inspection done. 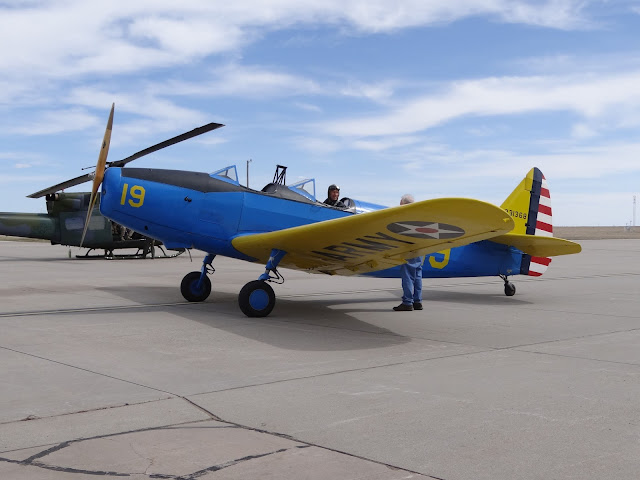 During the war nearly 6,400 PT-19’s were built, and they served as primary trainers for the US Army (this was long before the Air Force became a separate service), England’s Royal Air Force, and Canada’s Royal Canadian Air Force. In its role as primary trainer, the Cornell served alongside the more numerous Boeing-Stearman “Kaydet.” In later years, the PT-19 became known as the “Cradle of Heroes.” 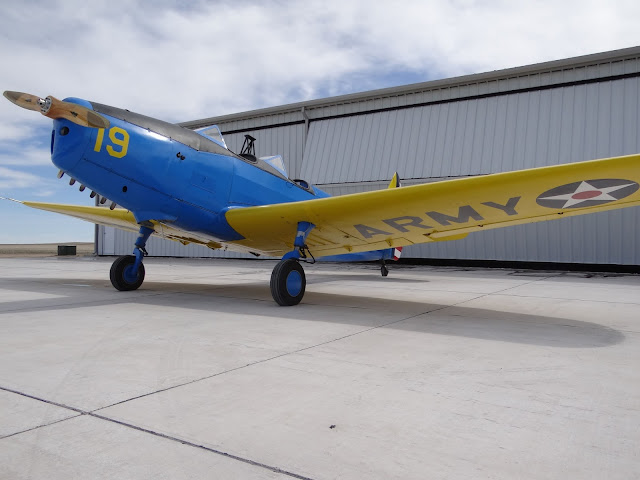 After I’d snapped a lot of pictures, the pilot apologetically asked me if I could help him push the beautiful aircraft into the hangar. I couldn’t believe my luck! Most people never get to see a PT-19 in person, and of the few who do, they mostly see them in museums, roped-off, static, aloof. But I got to actually lay my hands on this one; got to actually touch a living, breathing, flying treasure of history. 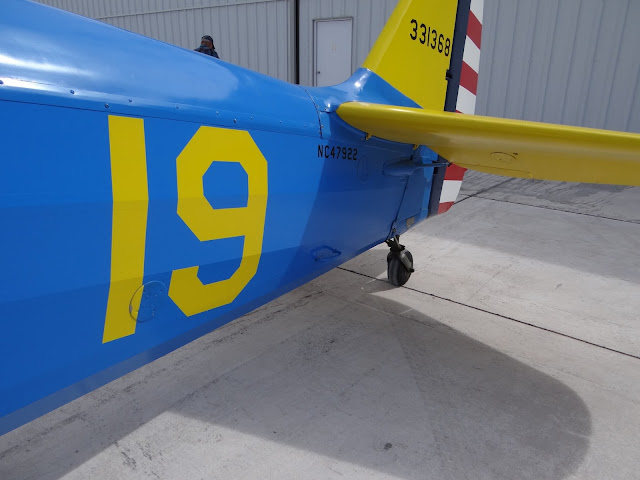 As I grabbed the wingtip hand-hold I couldn’t help but caress the taught, colorful fabric covering the wing. My mind raced, imagining the countless heroes whose hands had been there more than 70 years ago. Men like Bong and McGuire and Gabreski, and women like WASP pilots Evelyn Sharp from Ord, Nebraska, and Ola Rexroat from Pine Ridge, South Dakota. Perhaps not those exact men and women, but without a doubt, this airplane had trained thousands upon thousands of true heroes. And I was touching it! 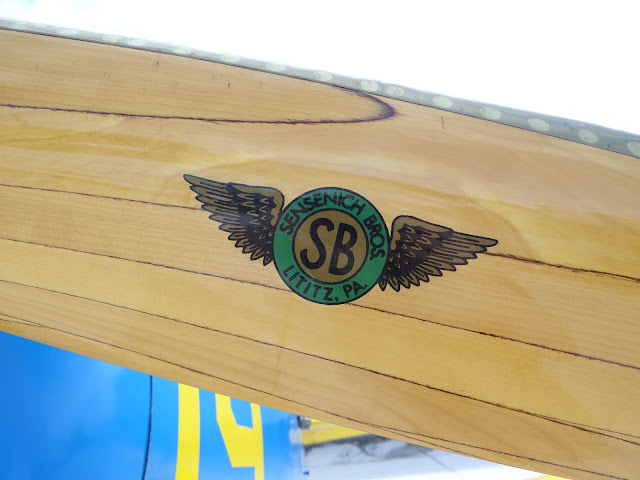 I know, I know. Far too many exclamation points in there. My journalism professor would not be pleased. 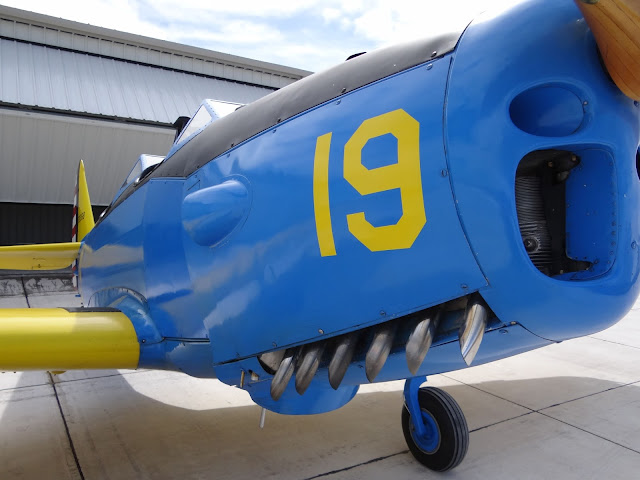 Perhaps you can find a way to forgive me my enthusiasm. Getting to meet and touch this airplane was a very, very happy thing. 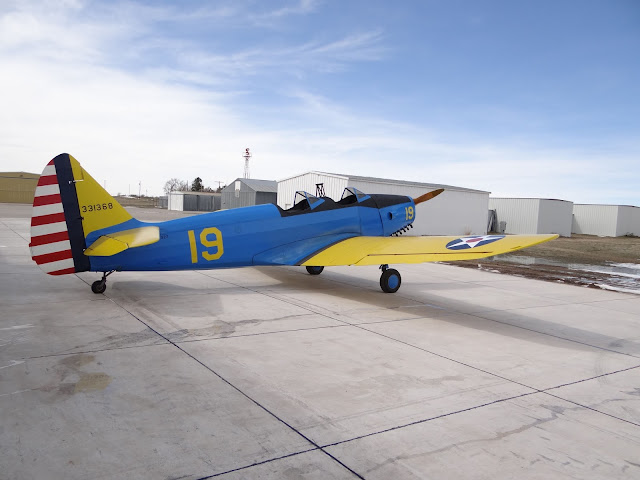 Posted by PrairieAdventure at 2:30 PM