To every thing there is a season

On Monday we started calving.

It's a joyous time, a time of birth and rebirth just as the High Plains prairie is awakening, all around, from its long winter slumber. 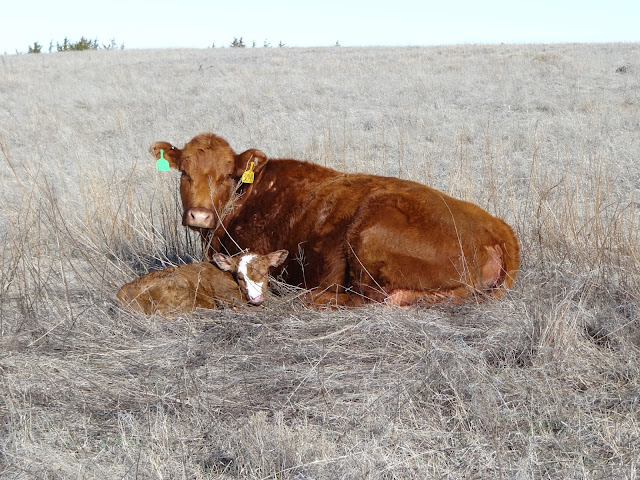 I shall write about calving next time.

Spring is not all rainbows and unicorns. Spring in the real world exists in reality, and not in fantasy. It doesn't live in a book or a television show or on the internet. Those things can describe spring tangentially, but they are not spring.

In the real world rebirth demands death. In the real world birth and death walk hand in hand. Not every calf survives, not every seed germinates, not every egg hatches. The richness of the soil comes from the decomposition of once living organisms; plants, animals, bacteria, fungi. They sprang from those things that lived and died before them, and in death they ensure that those things to come will be able to be born. This is the reality of spring.

Monk was a Welsh Corgi who came to the ranch when he was a puppy. I'm not certain, but I think that was 2005. On the day Dad brought him home there was a winter storm into which he disappeared. Dad was crushed, though of course he was stoic about it.

A week later the neighbors called. "Do you have any idea who this dog might belong to?"

Fifteen minutes later Monk scampered back into the house and dashed into the living room to see Dad. "Monk! How are you, buddy?" If I heard a catch in his voice or saw the glimmer of a tear in his eye I didn't notice it. 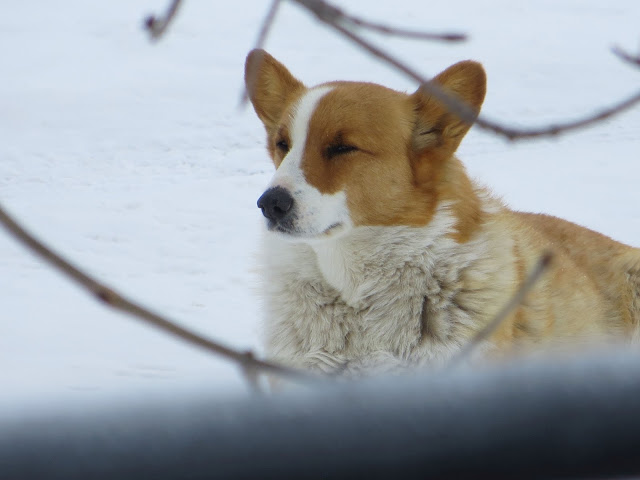 Monk had a pretty good deal until Jeter, Dad's "working" Border Collie, got big enough to challenge for alpha status. It was a heck of a fight. It wasn't to the death, but it involved some serious bloodshed. Monk gimped down into the windbreak after it was over and stayed there for three days while he healed up. When he came back out of the trees he was no longer top dog, and his personality had changed a bit, but he was still Monk. 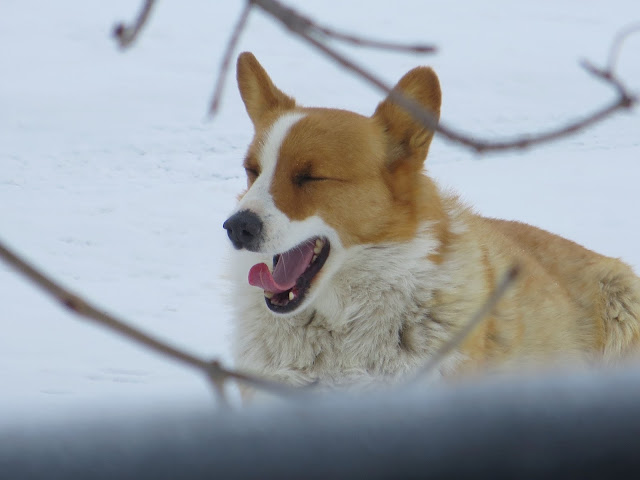 He loved to chase rabbits, and even more he seemed to love trying to dig them out from under wood piles. He didn't catch many, but he always threw himself completely into the task. 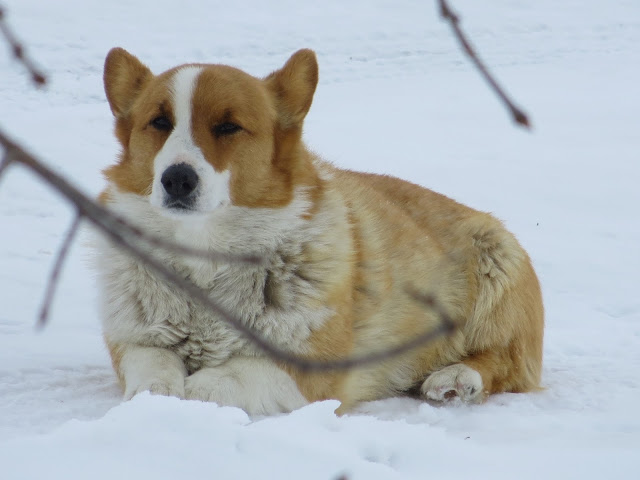 He was an outdoors dog who wouldn't think of coming inside on even the coldest night. He knew where all the best cold weather sleeping places were. In many ways he seemed to relish the cold.

As much as he seemed to like winter's cold, he also seemed to love soaking up the winter sunshine. He'd find a place that was sheltered from the wind and lay there for hours, blissfully letting the sun bathe him in radiant warmth.

Monk seemed to take a lot of enjoyment from life. Somehow, and this seems paradoxical, he seemed to approach relaxation and frisking about with the same zest. When laying up in the sun or in the shade he seemed to radiate a profound sense of comfort and satisfaction. From this state of semi-somnolent bliss, he would periodically erupt into action; to chase the small songbirds flitting around in the lilacs or to launch himself after a cottontail that no one else had seen. 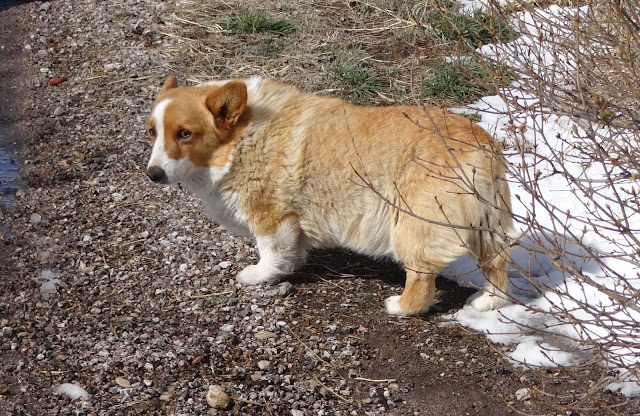 One of my most striking memories of Monk is the way he used to chase snowflakes. When the big, fat snowflakes would fall straight down from the gift of a calm winter sky, he would dash about, snapping them from mid air, seemingly trying to catch as many as possible before they hit the ground.

Another memory is the morning he turned up with a face full of porcupine quills. He seemed to be more embarrassed than anything, and somehow maintained an air of dignity. He also seemed to have absolute trust and certainty that his master would put it right. 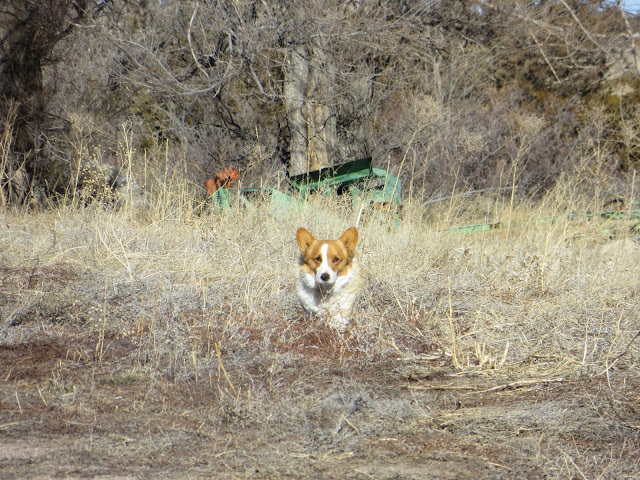 He didn't like loud noises, and seemed to be terrified of lightning and thunder. A thunderstorm was the only thing that would induce him to enter the house, where he would dash to the back bedroom and cower underneath the bed.

Monk liked people. Not in the frantic, tail-wagging, "oh please pet me" fashion of many dogs, but in a somehow more dignified way. He was always on hand to greet the arrival of family and visitors, and was always happy to receive a petting or an ear scratching, but it was more as if he was making himself available than seeking attention. 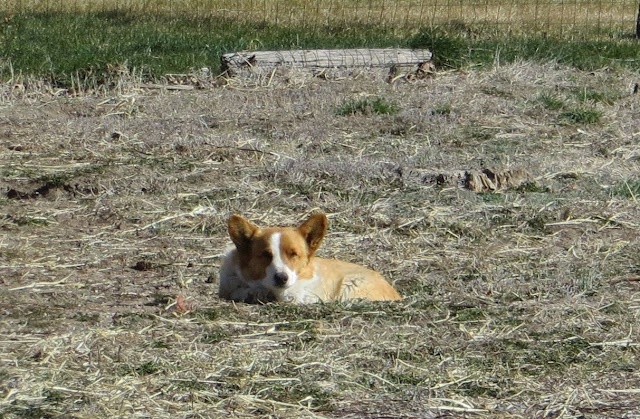 In 2012 my nephew Tyler wrote this about the farm dogs:

My grandparents have the sweetest most loving dogs in the world. Monk and Jeter. Jeter loves to play; he might jump on you but he still is the sweetest dog. Monk is a small dog that is calm and can't run because of his small legs and you could beat him in a race. They are the best dogs ever. They are loving, kind and sweet and if you walk up to Monk you can tell he’s calm.

There’s smile on my face. We stop at the end of the lane. Then we say our goodbyes and head home. On the way we see Monk and Jeter trying to catch up to us. We stop and start petting them, then we go home.

On Tuesday evening, after I'd checked cows, Mom met me at the back door with a tear stained face.

"Did you see Monk out there? He just died."

He'd been up and about in the morning, making his usual rounds. At around lunchtime he'd stretched out on his side in a favorite sunny location. When he hadn't moved from the spot by 5 p.m., Mom went to check on him.

"He was breathing funny and I asked him if he was okay. I put his head in my lap and petted him and he opened his eyes and looked at me. Then he took some shallow breaths, quivered a little bit, and he died. It was like he was waiting for someone to tell him it was okay to go."

Mom had a hip replaced just seven weeks ago. Imagine that, her on her knees in the ranch yard on a blustery spring day, holding Monk as he slipped away.

"Then I couldn't get up. I had to crawl to the fence to pull myself up."

What is it about a dog that can elicit that kind of love and devotion?

I dug a deep grave out in the graveyard where River and Ria lie. The springtime soil made for easy digging. I wrapped Monk in a ratty old lined jean jacket that he'd adopted as a sleeping cushion. His body was still warm, and superficially he seemed only to be in a deep sleep. It was more than sleep though. He was gone.

As I covered him up, out in the peaceful graveyard among the elms and junipers, surrounded by the soft green of an awakening prairie, out where no one could see, I let the tears flow. When the grave was filled and smoothed over, I placed a dead-fall log on top. It seemed appropriate; Monk loved to try to dig rabbits out from beneath those things.

Goodbye, Monk I'll miss you. Thanks for sharing your life with us.
Posted by PrairieAdventure at 6:29 AM