The stuff that happens


I couldn’t begin to count the number of times I was warned, in my youth, that things would be different when I got older.


When I was a young navy fellow I did a lot of running on the flight and hangar decks of aircraft carriers. Not content to simply embrace that level of silliness, I almost always chose to run in "boots and utes" (combat boots and utilities) because I was deeply in love with the profound coolness of my magnificent self. The running was quite important as I really did need to be fit for my job, but at the end of the day I paid rather a high price for the coolness upgrade.


Running generates a lot of kinetic energy. The feet, legs and the rest of the body are designed to absorb and dissipate the energy, spreading the load so that no single point takes all the impact. While the structural design of our human body is superb, even more amazing is the way it's constantly updating, upgrading and repairing itself. But there are limits to this self-repair, and we were never really designed to run on unyielding steel decks while shod in combat boots. My particular body did the best it could but did not emerge unscathed.


In 2007, as a result of my dedication to self-coolness, most of my left Achilles tendon pulled loose from the heel bone, while on the starboard side a similar thing happened to a lesser extent. On Groundhog Day, 2007, I had the left side surgically repaired and for the most part it's been reasonably trouble free ever since.


Oh, it's always a little bit sore but that's just what happens when you live long enough to regret youthful stupidity. Occasionally it flares up into frank tendinitis, which is usually pretty painful and causes some gimping around.


The tendinitis flared up over the weekend, but this time it came with a twist. I spent a good bit of time working on fence Saturday and Sunday, preparing to turn cattle into an as-yet ungrazed pasture. By the time Monday came my Achilles was rather tender and swollen. Nearly done with my fencing repairs, I forged ahead to finish, and as the day progressed the pain increased.


This time the pain was a bit different. In addition to the ache of tendinitis, there was an underlying burning sensation which I hadn't experienced before.


When I got home and pulled my boots off I noticed the problem right away. The back of my heel was red and inflamed and leaking fluid. It was infected. 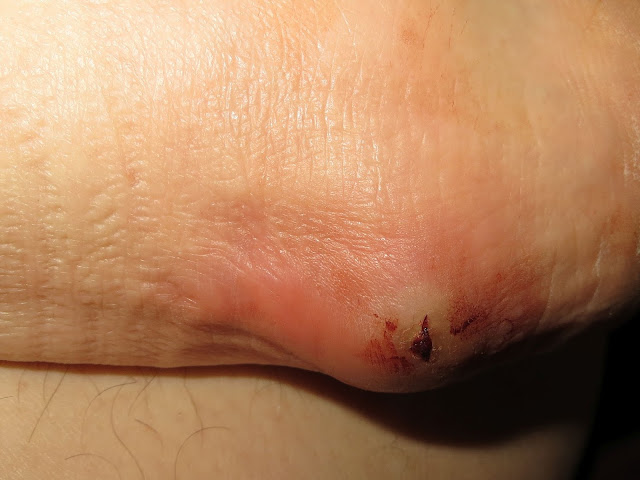 I spent a rather miserable night Monday.


On Tuesday I was at the local medical clinic when they opened their doors at 7 a.m. Within an hour I'd had the infected area debrided, drained and dressed and was on my way to the pharmacy to pick up some antibiotics and anti-inflammatories. 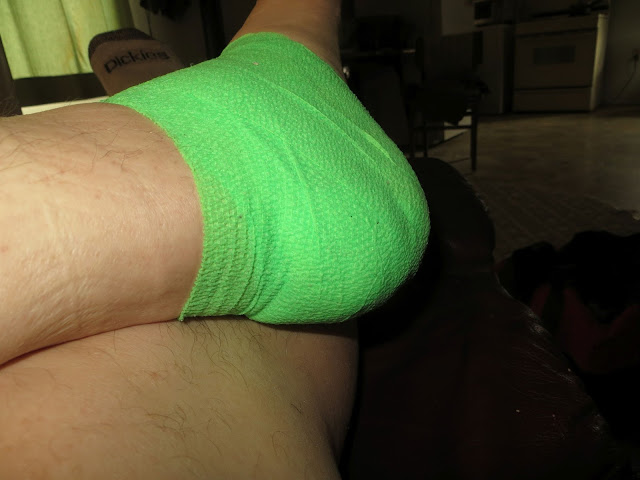 Now it’s Wednesday morning and I’m right up against deadline for my weekly Business Farmer submissions. I’m very, very sore. It took well over an hour for me to get up and dressed. I find it quite irritating and exasperating when the simplest things become major challenges, just because of a bit of pain.


Of course I’m exceedingly fortunate to have only a bit of temporary pain to deal with for a few days. My foot will quickly heal itself with the assistance of antibiotics and steroids. Only eighty years ago, before the advent of antibiotics, such an infection might well have been a death sentence.


I suspect that I’ll be gimping and grumbling today and tomorrow but will likely be back to business as usual by the time you read this.

These are days of miracles and wonder, and that’s something I usually take for granted.

But wait, now it gets really weird!

I always hate it when I come across snakes that have been smashed on the road. Seems like a waste. In reality though, people, cars and roads are as much a part of nature as snakes are. Some cars will squish some snakes. In the fullness of evolutionary time, nature will adjust and fewer snakes will get squished. I understand this, just as I understand that while a squished snake may be cause for regret, it's not a tragedy. It's all part of the grand panoply of life.

Anyway, as I was rolling toward home this morning, hurrying a bit to get to a place I could put my aching foot up and relax, I saw a freshly squished snake. Turned out to be a nice sized and formerly healthy prairie rattlesnake. 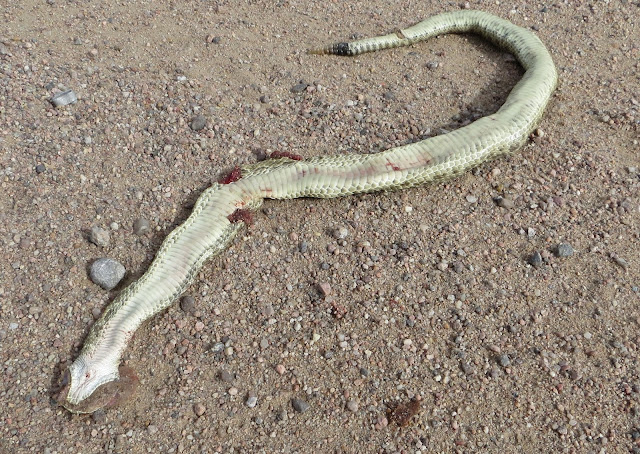 On a rather inspirational (if I say so myself) whim I decided to collect and preserve the head and rattles, even though the head was badly smashed. My thought was that I could take some detailed pictures to share with you kind readers -- the kind of pictures that rattlesnakes are seldom willing to pose for.

Let me just say that even though the snake was clearly dead and smashed beyond any possibility of biting me, it was extremely hard to convince myself to pick up that head. But I did it. For you, my readers.

So here are a couple of pictures. The snake head and rattles are now safely tucked away in a plastic bag in my freezer. 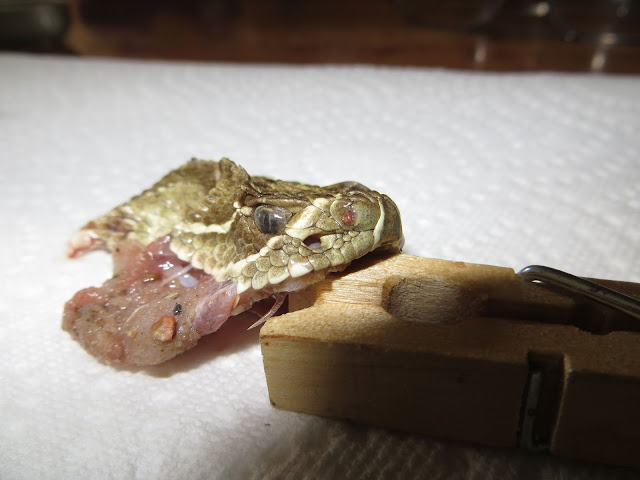 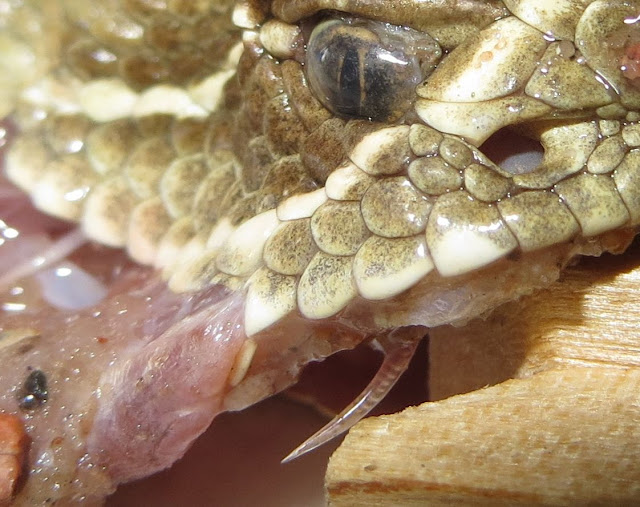 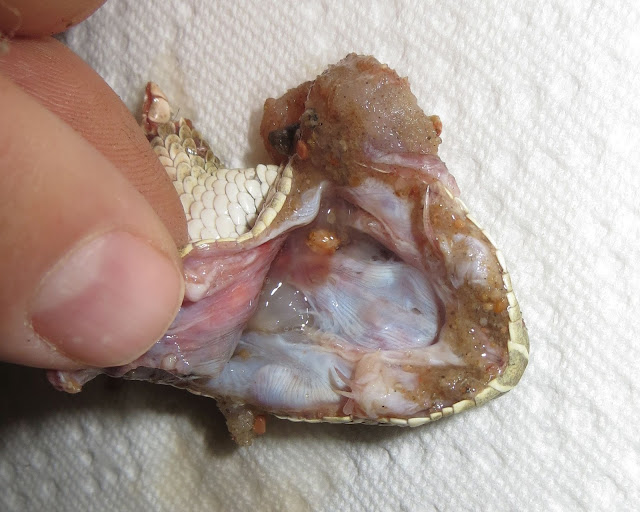 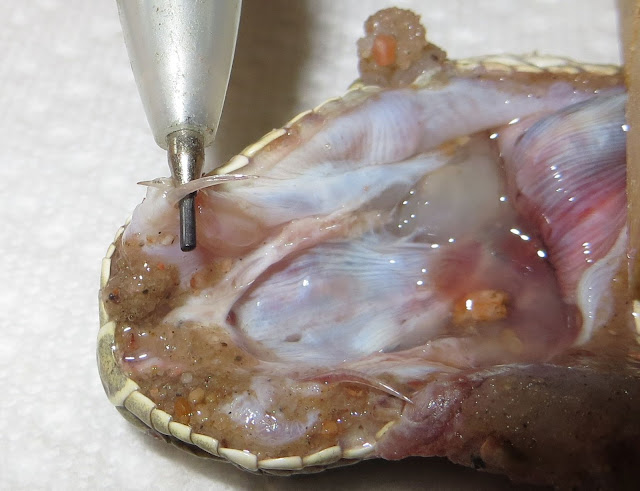 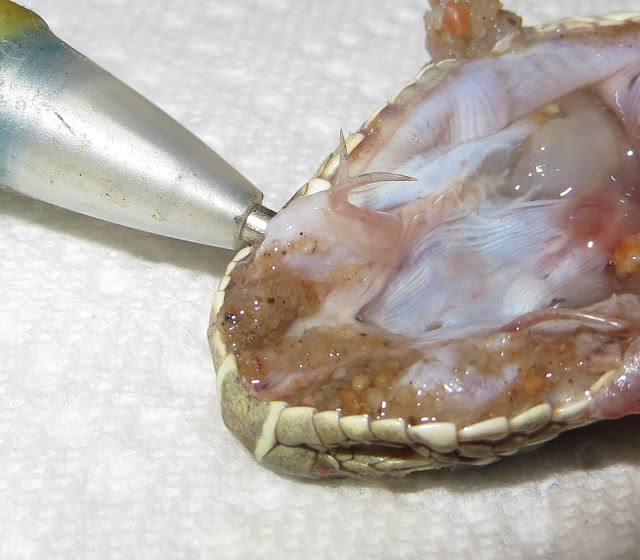 Posted by PrairieAdventure at 11:14 AM