Ah, but a man's reach should exceed his grasp,
Or what's a heaven for?

As I've mentioned here before I've got friends in Blighty, real English farmers who raise crops and livestock in Herefordshire (which the blooger/gurgle algoreythm believes to be misspelt, along with misspelt!).

As I've also mentioned here before (I think?) I've visited Great Britain several times. I loved it every time. But back then, many decades ago, I was engaged in doing navy stuff first, birding second, and sampling beer third.

In very many cases, viewing still and moving pictures of England produces a great sense of longing, a feeling that visiting those places would be a good thing.

This morning, while perusing a few of those digitised (c'mon, blooger/gurgle!) visual treats, my mind was poleaxed with a brilliant idea.

I must admit that in part the idea came from a Top Gear segment where Jeremy Clarkson drove from Land's End in southwest Blighty to John o' Groats, way up at the tippy-top of Scotland.

So what about it then? I want to visit Blighty and do some serious looking about. Why not combine that with actual boots on the ground hiking? Great Britain is often said to be a nation of walkers, and by law private land owners are required to let walkers cross their property (not sure I'd approve of that were I a Brit land owner). How hard could it be?

Of course it would be very hard. Done correctly, the hiking wouldn't be that bad. The distance is 800-ish road miles. Walking path miles would be more like 1,200. That wouldn't be all that hard, especially if buckled down and seriously prepared myself physically, mentally, and spiritually.

The hard part would be the logistics. Shoes, clothing, food, water, shelter, route, crossing the pond twice, communications, and a host of things I've not thought of yet.

So doable? Yes. Am I willing to do it? Not today. Is it a great idea? I think it is. Am I going to explore the possibility? Yes. 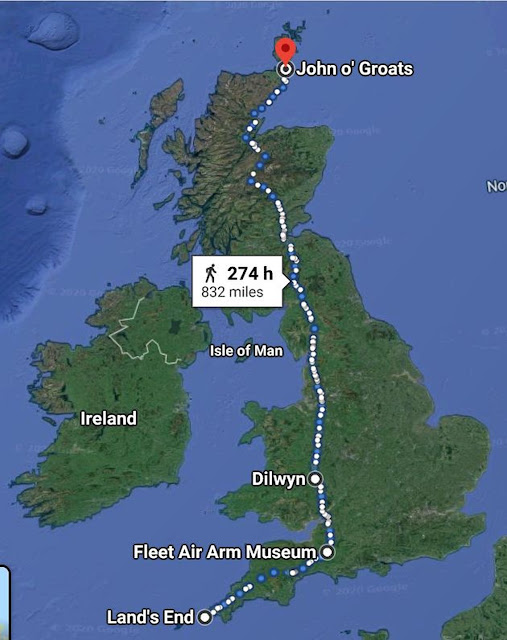 As with all campaigns my ability to execute this one successfully will depend on the physical, mental, and spiritual ability of the troops (troop in my case), getting the logistics right, fighting through the inevitable Clausewitzian friction, and not getting sidetracked by the beer and birds.

Is it a stupid idea? Well, how do you define stupid? I reckon that by societal "norms" the idea would be judged stupid. Why do a hard thing if you don't have to, and how would you possibly get the hours and hours of daily propaganda you need to survive? Besides, old codgers are expected to sit down, STFU, and croak out behind the curtain and at a convenient time.

Toss in the madman's giggle here. I've spent six decades destroying the hopes and dreams of those who've wanted to make me their property. Why stop now?

Reality being what it is, this thing might well be impossible(ish) for me. But I won't know until I crunch some numbers and see just how impossible it would be.

Oh yeah, have you heard that given the ongoing viral death scare Corona Beer recently changed its name to Ebola Beer?

Posted by PrairieAdventure at 10:38 AM