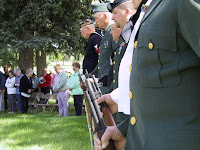 Nov. 16, 2006
The Kimball High Civics Class put together another wonderful Veteran’s Day celebration last Friday. A lot of work goes into these productions, and it shows. Perhaps, though, all the hours, practice, effort and the final culmination of the event add up to more than they seem, more than a simple sum of all parts. The combination of respect and appreciation flows both ways at these annual celebrations, and that feels right and proper to me.
As some of you know, I am myself a veteran. I served in the 80’s and 90’s, a time of relative peace, but a time marked by the cold war, high operational tempos, and a number of short, sharp combat engagements. I lost a number of very close friends and an even larger number of acquaintances during my years of service. Those losses have been hard for me to come to terms with, and while the sadness and pain have eased with the passing of years, they will never be gone. Veteran’s Day and Memorial Day services always bring those memories to the fore in my mind and in my heart. Sometimes gently, producing a quiet, longing ache. And sometimes sharply, with a powerful and unanticipated upwelling of emotion. I never know ahead of time how I will react to the event. Sometimes it's relatively easy, and sometimes it's not. Either way, each celebration has a healing effect on me for which I'm very thankful.When the sixth graders sang a medley of service songs, and as veterans in the crowd sprang to their feet in turn as small voices sang the “Marine Hymn,” “Wild Blue Yonder,” “Caissons,” and “Anchors Aweigh,” I felt a warm sense of gratitude at the honor. As the fourth and fifth graders sang “Proud to be an American” and “Yankee Doodle,” I felt powerful sense of continuity in our shared 230-plus years of American history.
Colonel Robert Taylor, a native Nebraskan who served a pair of tours in Iraq with the Third Infantry Division, gave a wonderful talk on the history of the United States Army. For an historian, listening to the recitation of the Army story, from Lexington and Concord through the present, was very satisfying. The continuity of Army service in defense of our country is remarkable. The names of famous battles and campaigns are touchstones for a Nation which has always been a beacon of freedom. Gettysburg, the Marne, Anzio, Normandy, Okinawa, Pork Chop Hill, the A Shau Valley, Urgent Fury, Just Cause, Desert Storm, Anaconda, OIF. Those names remind us that there have always been, and are today, Americans who are willing to risk, and if need be sacrifice, their lives so that we at home may breathe freely and sleep soundly and without fear at night. And so those who are today crushed beneath the heel of tyranny will have at least the hope of a better day, have at least a glimpse of liberty.
Taylor, who introduced himself simply as "an American Soldier," also shared a slide-show of images taken during the liberation of Iraq. From my perch near the second graders, I got to listen to and watch as they reacted. There were the expected "oohs" and "ahhs" when explosions were shown, and as tanks fired their big tubes, and more than a few guffaws and giggles accompanied pictures of toppled statues. But the reactions tailed off to quiet, wondering silence as images of helmet-topped rifles and the tear-streaked faces of soldiers, themselves little boys, really, flashed across the screen.
It wasn't just the second-graders, either. I'd guess that a lot of folks in the auditorium were seeing these kinds of images for the first time. They saw stark, silent pictures, raw and filled with detail and emotion. Images not packaged for entertainment, without a light hearted, never-been-anywhere voice quickly explaining them away.
Some in that room had seen it all before, and our hearts remembered when.
I sensed that the kids were surprised and even a little shocked. But I also sensed, partly from their reaction and partly by virtue of having once been a second-grader, that they understood, at least a basic level, what it was all about. They understood that somehow, some way, a link exists between them, the pictures, and the uniformed men and women in the auditorium.
I looked around, and it was good to see them together, the veterans and the children.
A pair of high school girls played Taps. That melody triggers a personal slideshow for me. Doubtless it does the same for others.
A duet from the swing choir sang the Lee Greenwood Anthem "God Bless the USA." Most in the auditorium joined in, but somehow the small voices overcame the large. Small voices singing from the heart, which is the only place children know to sing from, filled the air with a warm blanket of magic.
Then the moment was gone, and the kids were dismissed to fill the remainder of their busy days. The crowd slowly dispersed, and handshakes were exchanged at the door.
The respect and appreciation lingered, though, as did the healing magic of small voices raised in song.
Posted by PrairieAdventure at 1:41 AM

An October blooming sunflower is a precious gift and makes me smile. There are reasons. As do these guys, who sent me this image on Septembe...