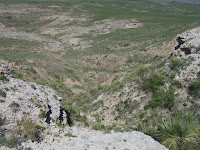 I decided to put the hammer down today and really push my conditioning and Achilles rehab. I set a good benchmark a month ago and have been slowly increasing the pace, but I decided to push it today and see if I needed anything other than healing and strengthening. If there's a functional problem I'd rather find out sooner rather than later. Today I'm 90 days post-op. Yee-haa!

I dressed right and slugged down my pre-workout breakfast of a pint of V-8 with a pair of raw eggs spun in. Actually pretty tasty. Kind of like a tex-mex egg cream. Only different. Took naprosyn with that. Then I strapped on my expensive but oh so wonderful Danner tactical boots, good and tight, took up my gear, and moved off to my starting place.

Stretchies and groanies first, then I power hiked it, with my 22 kilo ruck and my rifle and camera, my standard load. I pushed hard and went up and down a bunch of heart-thumper hills both for the cardiovascular workout and because the provide just the rotation, flexion and extension loads I need for the Achilles rehab.

Oh, the prairie was beautiful today. So green and lush and simply awash with wildflowers. I saw at least thirty jackrabbits and as many cottontails, some of them teeny-weeny but fast for all that. I've taken to calling the jackrabbits "blackeyes," because they stand there in profile and look at you with that one huge, black eye. I saw groundsquirrels and a few skittering mice and the air was filled with soaring raptors. I saw one porcupine but he was not fast at all. The wind shifted from south to northwest about 9:30, then shifted back and got stronger. Probably 20 mph by the time I finished.

My route took me in a familiar direction, across lumpy and uneven prairie filled with hills and washes and big limestone outcroppings. I scrambled to the top of a big prominent ridge eight times, from eight different directions. Some routes were very steep and provided nearly too much workout.

I took very few pictures, and most of them near the end of my hike. I was there for a workout, after all. And I think I accomplished that goal. I'm pretty sure my heartrate was over 150 for at least a couple of hours.

It was relatively cool when I started but temps were in the upper seventies by noon. I soaked my clothes with sweat several times, especially climbing the lee side of the hills, but a few minutes in the breeze dried me right off. Still, my togs were stiff as cardboard when I took them off, crackling with the encrusted salt of honest sweat.

GPS is a wonderful thing. I dump the data log in my computer and it spits out a lot of cool numbers, graphs and charts. Todays numbers are good ones. 16,257 meters is 8.77 nautical miles, 10.1 statute miles, 17,779 yards. The vertical track is fascinating. My net altitude change was only 249 meters, or 817 feet. But the cumulative change was 3,562 meters, or 11,686 feet. That's about 2.2 miles of up and down, and probably part of the reason I'm tired this evening. Feels good, though.

Some folks thing Nebraska is flat. It's true that there are no real mountains here, but go for a stroll with me sometime and I'll disabuse you of the notion that the Cornhusker State is a billiard table. Click on the attached photo and you'll get a glimpse of what I mean.

All in all it was a wonderful workout. I was sure glad I could call it a day at the end though, and go relax. Those poor tough bastards in Iraq and Afghanistan do my 10 miles three times a day and have to be constantly ready to fight. Definitely a young man's game.
Posted by PrairieAdventure at 9:26 PM