Can you really afford that turkey?

If you've read the same (or similar) headlines I've read over the last week, you know that (horrors!) the price of a home-cooked Thanksgiving meal for 10 has skyrocketed to over $50!

But a funny thing happened in reality, which is that place where reporters, news readers, bureaucrats, SJW's and other assorted bottom dwellers never visit.

The comparative cost of the meal actually went down. Not by much, mind you, but down. As opposed to the increase (9.8 percent according to the major math challenged propaganda networks).


The cost of the 2015 Thanksgiving meal for 10 came in at $50.11, seventy cents more than last year's average of $49.41.
Now most of the headlines surrounding this year’s survey trumpet the dollars-and-cents increase over 2014, but that’s not the whole story.


When you factor inflation into the mix, using the Consumer Price Index (CPI) method, something interesting happens. You find that the 2015 meal came in at two cents less than 2014 meal.


A little pre-turkey food for thought.


The methodology of the AFBF survey, while not strictly scientific, is actually quite good. A total of 138 volunteer shoppers checked prices at grocery stores in 32 states. The shoppers are asked to look for the best possible prices, however, they are not allowed to include special promotional coupons or purchase deals, such as a “free” turkey with a certain level of spending.


The AFBF survey shopping list includes turkey, bread stuffing, sweet potatoes, rolls with butter, peas, cranberries, a relish tray of carrots and celery, pumpkin pie with whipped cream, and beverages of coffee and milk, all in quantities sufficient to serve a family of 10. There is also plenty for leftovers.


Here are the average 2015 survey costs:

Although survey shoppers were not allowed to take advantage of special promotions when purchasing their bird, there’s no reason why you shouldn’t. Special sales and promotions on turkey and other holiday food items generally continue until the doors close on Wednesday evening. Quite often prices are reduced sharply in the last day or two before Thanksgiving.


Some markets feature prices much lower than the survey average, even without special promotions or giveaways. At Kimball’s Main Street Market I paid $0.69/lb for my 16 pound turkey.
Items that declined modestly in price were mainly dairy items including one gallon of whole milk, $3.25; a combined group of miscellaneous items, including coffee and ingredients necessary to prepare the meal (butter, evaporated milk, onions, eggs, sugar and flour), $3.18; a half pint of whipping cream, $1.94; and 12 ounces of fresh cranberries, $2.29. A one-pound relish tray of carrots and celery (79 cents) and one pound of green peas ($1.52) also decreased slightly in price. 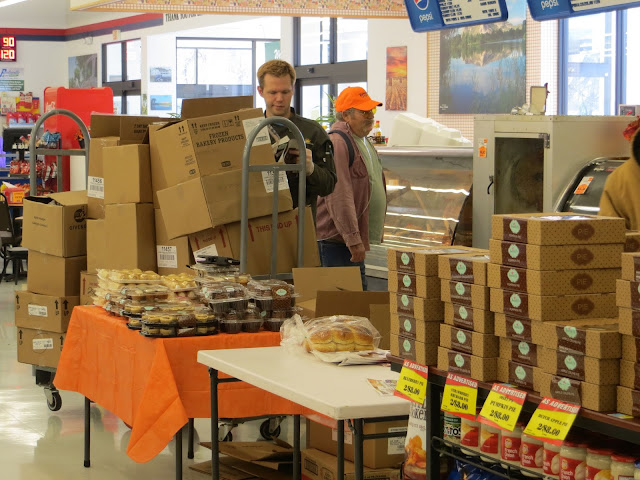 The AFBF survey was first conducted in 1986. While Farm Bureau does not make any scientific claims about the data, it is an informal gauge of price trends around the nation. Farm Bureau’s survey menu has remained unchanged since 1986 to allow for consistent price comparisons.


I conducted my own 2015 Thanksgiving meal survey at Main Street Market in Kimball this week, and priced the same items for $42.98, saving $7.13 compared to the AFBF survey. Although seven local items were more expensive, six were less expensive, including the turkey which, at 69 cents per pound, represented a $12.00 saving over the national survey price. And that's out here in the hinterlands, 200 miles from the nearest major food distribution hub. And just look at this -- a fully stocked supermarket out in the sticks doing a booming business in a town of fewer than 2,500. 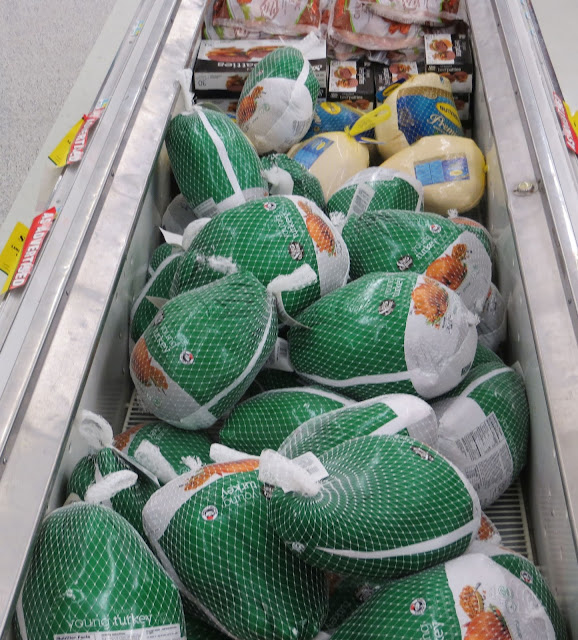 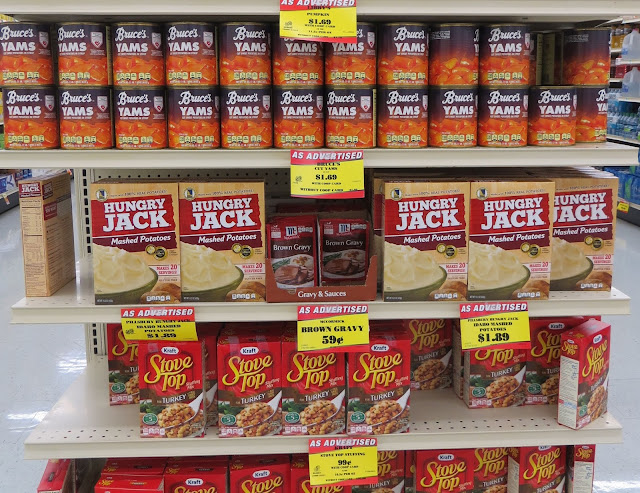 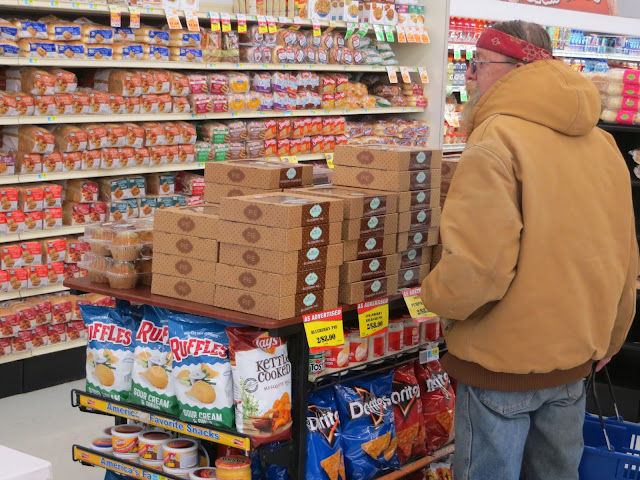 When prices are adjusted for inflation, you find that not only have food prices remained quite stable over the last 28 years, but that food dollar value has steadily increased. For instance, when adjusted to the Consumer Price Index, the $28.70 paid for the 1986 survey meal would cost $69.86 in 2015. At $50.11, the 2015 survey meal is considerably less than the 30-year rate of inflation. When adjusted for inflation, the American food dollar has considerably more purchasing power than it did in 1986.

Just for fun, let's look back a bit farther. If you go here you can get a feel for various aspects of American life over the years. The information isn't comprehensive or encyclopedic, but what's there is valid and cited for the most part.

Another factor to consider when we think about the cost of our Thanksgiving meal is that Americans continue to enjoy the safest, most nutritious, most abundant and most inexpensive food supply in the world, and that by a fair margin.

All things considered, Americans have plenty to be thankful for this holiday season.

Tomorrow (or when I get around to it) I'll really go on a rant.


Posted by PrairieAdventure at 1:48 PM