The high summer heat of July is starting to wane. It's been more than a month since summer solstice, and the sun is well along on its southward journey. Each day is slightly shorter than the last, each night slightly longer. Fewer minutes of sunlight means fewer minutes of warming. As the sun moves south, the sun angle grows more acute with respect to the surface. Sunlight must now take a longer, slanting path through the atmosphere rather than hammering straight down, and this serves to attenuate heating as well. 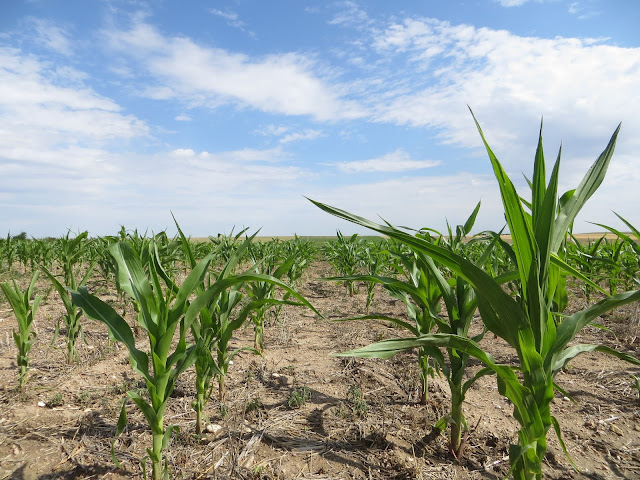 Back in the winter, meteorologists were predicting the onset of El Niño conditions in the July-August time frame. Such conditions often presage slight cooling and increased precipitation here on the High Plains. As it happens, sea surface temps in the equatorial Pacific are indeed elevated, but atmospheric conditions remain neutral. The current defined ENSO state is therefore neutral, but it's interesting to note that about a week after sea surface temps came up we began to have a bit of cooling. That's just information, and the correlation doesn't prove anything at all, but it is interesting to think about.

The sun is the driver when it comes to summer heat, but there are countless factors which contribute to high mercury readings and our subjective perception of "it's toooooo hot!" The n-illion molecules of nitrogen, oxygen, and water vapor are constantly bashing into one another, flowing down concentration and pressure gradients, joining together in ridges and troughs, and carrying on according to our best understanding of chaos theory.

Humans contribute too, but despite the car-salesman patter of the AGW crowd, there's simply zero credible or falsifiable evidence that our contribution is any more or less than that of butterflies and mosquitoes.

Now that I'm old and fat I notice summer heat more than I used to. At this point in my life I don't have a lot of choice about working outside. The work must be done, and waiting for cooler weather isn't a viable option. I prefer to work when it doesn't feel too hot (duh), but I also perversely pride myself on being able to take the heat. 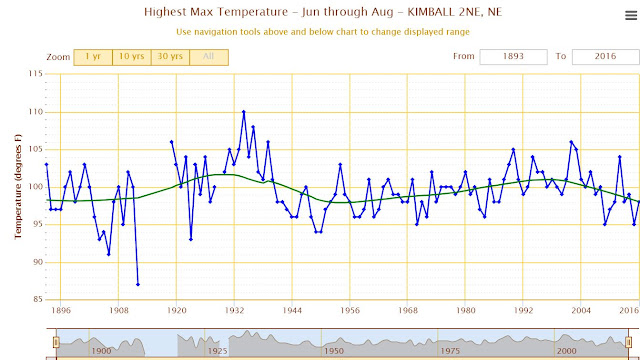 Just for completeness, the average June-August mean air temperature BITD was about 79 degrees; so far this summer it's running about 75. 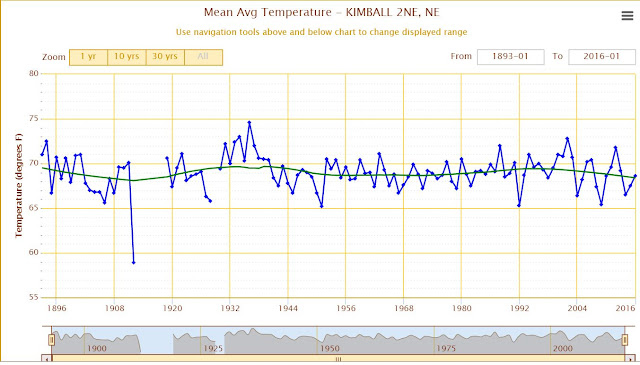 So I've got no room to complain. I still do complain, but I also know it's not that hot.

Farmers are a fortunate lot, at least in this place and time.

In a world where people increasingly distrust nearly everything, a recent Princeton University survey showed that the American public holds farmers in high esteem.

Despite a never-ending stream of anti-agriculture news and opinion, farmers were rated as one of the top professions when it comes to competence and trust, along with doctors, nurses, and teachers.

This means that farmers have a great deal of credibility capital.

Perhaps one reason for this is the fact that despite a great deal of negative press and sensationalistic scare tactics, every American must eat several times a day, and most folks realize that none of the scary predictions ever come true. They seem to understand that the food they buy and consume is utterly safe, healthy, nutritious, and incredibly inexpensive, and they know that farmers produce that food.

I’d offer a word of caution though. Farmers and ranchers should carefully guard their credibility. It’s very easy to lose.


A few cases in point.

The Whole Foods company, a food market chain which has built its customer base by offering exclusively “natural” and “organic” foods, was doing a booming business until they made a terrible mistake. In their advertising campaign they began to use a lot of junk science as evidence that the foods they sell are healthier, safer, and more nutritious than the foods sold by their competitors -- the more traditional supermarkets and grocery stores. Then they began to attack non-organic, non-natural farmers, accusing them of raising monstrous GMO crops, using deadly chemicals and pesticides, and for intentionally producing unsafe and unhealthy food in order to make money.

Well, people aren’t entirely stupid, and most folks used personal experience and a bit of light fact checking to satisfy themselves that the advertising claims made by Whole Foods are entirely bogus. Furthermore, people generally react badly when they feel like they are being lectured to by people who’ve taken on an air of unearned moral superiority. And people really, really, really hate being lied to.

Whole Foods also wounded themselves severely when all three of their regional kitchens were shut down due to a long list of FDA violations. On inspection of the kitchens, FDA Inspectors found employees splashing dirty water on to ready-to-eat vegetables, condensation dripping into barrels of egg salad* and onto food prep surfaces while veggies were being chopped, and over spray of ammonium-based sanitizer landing on food being prepared. The facilities also lacked adequate hand washing facilities and  inspectors found an unmarked drum of chemicals in the vegetable prep area.

Even worse, samples taken from food prep areas grew out a number of pathogens, including Listeria monocytogenes, a particularly nasty pathogen which kills about 260 Americans each year. Food poisoning caused by Listeria carries a 16 percent mortality rate, making it by far the most deadly form of food poisoning. By comparison, Salmonella, E. coli, and other pathogens associated with food poisoning carry a mortality rate of only 0.006 percent.

People naturally wonder why a self-proclaimed paragon of safe and healthy food would behave in such a fashion. Unsurprisingly, Whole Foods market share and stock prices plummeted, and last month the company was purchased by Amazon.


Another self-proclaimed paragon of wholesomeness, the Chipotle restaurant chain, mirrored many of the strategies of Whole Foods. In addition to jumping on the “natural” and “organic” bandwagon, they went all-in on “humanely raised” meats. Unfortunately for Chipotle, they were then caught selling meat which violated their own policies. Next, Chipotle restaurants went on to actually sicken hundreds of customers with E. coli, Salmonella, and Norovirus outbreaks.

The American Council on Science and Health (ACSH) recently pointed out that Americans are far more likely to be sickened by eating at Chipotle than to be injured in a shark attack. The beauty of the ACSH story is that it put the statistics in scale, context and perspective. There are about 9.7 food poisonings for every Ten Million meals served by Chipotle. For all intents and purposes, it’s nearly-perfectly safe to eat there. However, Americans suffer only 0.6 shark attacks per ten million beach visits. Again, a very small number, and American’s are nearly-perfectly safe from shark attack. Still, you are about 17 times as likely to be sickened at Chipotle than to be attacked by a shark at the beach.

As I mentioned before, people aren’t entirely stupid, and they hate being lectured at and lied to. Chipotle stock prices have tumbled from about $800 per share to less than $400 per share.

Quite a few farmers and ranchers have climbed aboard the “healthy food” train over the last decade or so. Many market the food they produce as natural, organic, non-GMO, grass-fed, free-range, antibiotic-free, and so forth. Even worse, many have also developed marketing/advertising strategies that directly or indirectly attack producers who employ traditionally modern agricultural techniques.

I’ve talked to quite a few of these folks, and all of them seem to be well aware that the claims against modern agricultural practice are entirely baseless. Their justification is basically this: “It’s just marketing, man!”

Well. It might be worth rethinking that strategy. The only way to keep the credibility capital farmers and ranches presently own is to actually be credible. To be honest.

*Barrels of egg salad -- I'm not sure that's a phrase that should ever have happened.

Posted by PrairieAdventure at 8:10 AM