...attend my competency trial? It should be hugely entertaining.

In my previous post I hinted begged for advice on how to download files -- specifically images and videos -- from my phone to my PC via the usb cable. It was quite easy with my previous phone; simply connect the cable, locate the phone in "this PC," double click the phone icon and open it to the appropriate folder, then select the files and drag them to a destination folder on the PC. Nothing to it.

With this "new" phone I've never been able to pull it off. Every time I connect and double click on the phone icon it tells me "folder is empty." Carp!

In the title of yesterday's post I hinted at what I was pretty sure the problem was. The phone and computer were doing precisely what I had told them to do, rather than what I wanted to do. In other words, it wasn't a problem with the hardware (although I popped for a new usb cable) or the software, it was the meatware.

As always, you kind readers came through for me. Harold pointed me toward the dcim file where I discovered the phone was rat-holing images because reasons (sure to be a meatware issue, though possibly not your correspondent's meatware).

Sarge suggested -- politely mind you -- LATFPD -- (look at the firetrucking phone, dummy!). Which reminds me an awful lot of what every C-School instructor wrote on the chalkboard before every written test -- RTFQ!

So I tried that. When I plugged the phone into the PC the phone popped up a message that said:

Which instantly caused me to remember that I had told the phone not to share any info with anyone without first asking. Which is, I think, a smart thing to do.

When I selected allow, the PC was able to open the phone. And there were no images or videos in "pictures" or "movies" as there would have been in my former phone. However, acting on a tip provided by Harold, I found the files I wanted in dcim.

The phone was doing prizackly what I told it to do, and the PC was reporting that the phone wasn't willing to play the particular game I was proposing. It could have spelled it out in language I understood, mind, but that's just a quibble. The meatware is supposed to be in charge. The meatware was in charge. If the meatware has a bug, it's not on the software or the hardware, it's on the meatware.

Humble and heartfelt thanks to Harold and Sarge.

However, Sarge also taught me to do italics and bold in comments. I think it's that hyperspace tesseract magic letters stuff. So heck, it's a win-win all the way around.

It was overcast this morning just after sunrise. Overcast, a touch chilly, and nearly wind-free.

Charging ahead later, I set out on a hike. The weather was nice with the exception of the wind, which had come up to 25 gusting 40 and was irritating. But only just irritating as the air temperature was about 50 degrees. It was mostly cloudy but Sol was present and the warmth of the big mass of fusing hydrogen was very nice indeed. From that perspective the breeze might have actually been beneficial. But don't tell anyone I said that.

The jury is still out on on the wrist activation button for the new camera. Not on the button itself, mind. No, that thing works great. The question is whether I can actually work it.

As long as the camera is powered on, pressing the red button takes a picture and pressing the gray button starts a video recording. To stop the video recording, press the gray button again. Of course with the camera on my chest it's a bit inconvenient to check whether it's recording or not. I have to fold it forward and look at the tiny screen on the back. It's making a video if a little red dot is slowly flashing on and off. Which is easy to see when I'm sitting at my desk, but not so easy out in the field. Bright outside light and sun glare make it hard to see the screen, let alone the dot. Plus I'm also usually moving, so I'm trying to navigate around obstacles  and take in the scenery. You might ask whether it's that hard to just stop and check. I'm asking myself that question as I key this text into the magic box. At a kind of deep and instinctive (perhaps?) level I'm reluctant to stop moving when I've told myself I'm working out. I've got devices tracing my progress after all, and a two second pause could play hell with my world-class hiking times!

Here's a picture taken with the red button while I was moving. No, I don't believe it's specifically for taking pictures of Red. I'm not entirely certain though. The owner's manual is a bit less than clear on many things. Although it reads far better in English than anything I might try to write in Chinese! 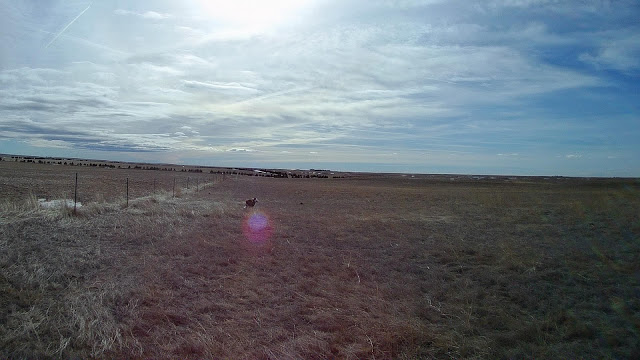 I crossed an erosion control dam and scrambled up a steep ridge in a howling wind. I tried walking like I had a book balanced on my head (and you probably know the othe part of the equation) but I'm not very good at that, especially on uneven prairie ground, in the howling wind, and staggering up a slope. In reviewing the video I think that having the 140-degree wide angle enabled is making the swaying look a lot worse than it is. Therefore my plan is to narrow the field of view and see how that works. Maybe it'll help. On the bright side, once I made the top of the hill I tripped over a frozen atom and nearly face-planted. But I'm remarkably light on the pins for a grumpy old fat man!

I went rather a long way today. I did about three miles into the wind and almost four on the way back. I shot a lot of video but it was all horrible. Just a lot of swaying and panting and bitching and talking sailor talk.

I also found that extended distances without plenty of steep slopes to go up and down played havoc with my nerve pain. I think it has a lot to do with spine, hip, and leg geometry. Regardless, I was hurting a lot near the end.

At the end I struggled crossing the four-wire fence. But I struggle at that whether I'm sore or not.

I did a bit less than seven miles with some hills mostly at the beginning. It was a good workout and despite my complaining it was good for me and made me feel pretty good. The nerve pain went away within seconds of sitting down, and it's not bothering me at all right now.

There was quite a bit of other stuff going on today and I'm just getting home at 9 p.m. Guess I'll call it a day.

Be well and enjoy the blessings of liberty.


Posted by PrairieAdventure at 3:00 AM