I keep running out of hours! While I did get a chunk of another post written this morning, I don't yet have it whipped into shape for publication. Therefore this will be yet another brief one, touching superficially on the day.
It did get quite warm today. The predicted high was103 and we came close with the mercury actually touching 101. 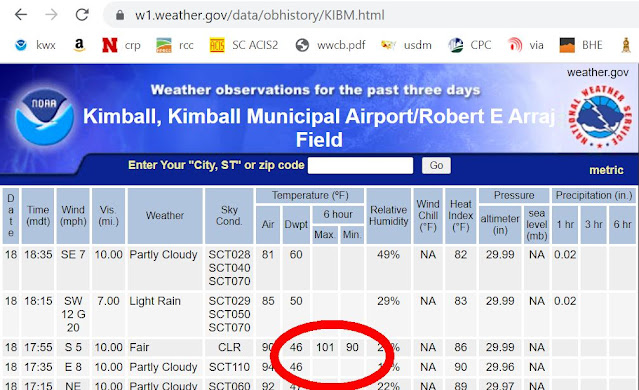 It was a reasonably cool 68 when I got up at 5 and for an hour or so it was quite pleasant. As I checked cows I noticed that we'd had a nice overnight rain across the northern third of the home place. Probably about two-tenths, judging by the puddles and the dampness. Nary a drop at the house or down at the south unit. Rainfall can be funny like that at times. There was a nice breeze early which had the windmills pumping water. The wind shifted from north to south though, and you could taste and smell the heat of Texas.
The cattle were grazing where the rain had fallen and seemed to be relishing the bright greenness of reinvigorated grass. By the time I snapped this image, though, it was already getting hot.

My next bit of pop-up tasking was to get on the phone with the ranch's sat tv provider to clarify whether we would be getting the Wyoming PBS channel in HD. The young woman I spoke with was quite pleasant and had a delightful rather than non-understandable accent. She introduced herself as Alex. I've no idea whether that's her real name or a nom de job, but it felt like a nice coincidence. It took longer than it should have to get the yes to the simple yes or no answer I was looking for, but I understand how this stuff works. Or I think I do. Anyway, I was nearly late for watching the kids, but I was not late, so it was all good.
##########
When I arrived the big boys were playing video games. It's not a hill I'm gonna fight on, however, I'm not above occasionally (not often, just occasionally) remarking in response to a question, "you'd know that if you spent a little quality time in reality." Of course in their world I'm massively antiquated and not at all equipped to deal with the actual new world. There's truth on both sides.
The littles were divided on what kind of adventure we should have. The almost first-grader wanted to go outside to swing and ride scooters. Therefore the four year old wanted to stay in and color. The compromise was color first, then go outside. Interestingly, and completely unsurprisingly, by the time the four year old was ready to go outside, the almost first-grader wanted to keep coloring. Moments like these are some of the very best parts of livin'.
We decamped to the yard and commenced playing. We did swinging, then stick throwing, then had a lovely spruce cone fight. Covered in sticky and aromatic spruce sap, it was time to ride scooters and trikes and have a lesson in sound wave propagation. Which mostly made the kids realize it was too hot out.
So we went back inside and played with play dough and slime until it was lunchtime. Then it was back to work for me, and I spent a couple of hours working on cleaning up retired fence. A perfect job for a scorching hot day.
##########
In the early evening I took the opportunity to make a batch of hyper-chocolate ice cream. Kids will probably be at my house later in the week and it's still supposed to be hot, so perfect ice cream weather.
The ice cream thing is fun to do, at least so far. I remember it fondly from when I was a kid. The taste was wonderful, particularly after taking my turn on the churn crank out in the heat of a mid-summer evening. I only recently decided to give it a try once again. For thirty bucks the rain forest river company sent me an electric motor-cranked churn/freezer (proudly designed in 'merka!), and my first two 'speriments have been successful.
Food for thought. I spent five minutes trying to find past prices of home ice cream makers. The newspaper ad I found was from 1925, for White Mountain brand. A four quart  hand crank (no 'lectrical available) model would set you back eight bucks. According to the Fed Bank of Minneapolis inflation calculator, $8 in 1925 equals $133.45 today. What does that mean? Hell, I don't know, at least not comprehensively. There are a lot of variables. Fun and worthwhile to think about though.
The real fun will be getting the kids involved. The big boys should be able to cook up a custard base with only a few disasters and plenty of opportunity to learn about supercooled water and freezing dairy mixtures. I think the littles will be down for five minutes of the adventure and then be massively impatient for the eating. I've done my learning and practicing so I should be able to supervise a fun and messy experience. We'll see how it goes.
##########
Learning and practicing?
Here's the hyper-chocolate recipe:

2C half and half
1C sugar
2T unsweetened cocoa powder
¼ teaspoon salt
3 egg yolks, lightly beaten
3 ounces each white and dark chocolate chips
2 cups heavy cream
1 teaspoon vanilla extract
Combine milk, sugar, cocoa powder, and salt in a saucepan over medium heat. Bring to a simmer, stirring constantly.
Place egg yolks into a small bowl. Gradually whisk in about 1/2 cup of hot milk mixture, then return to the saucepan. Heat and stir until thickened, but do not boil.
Remove from the heat and stir in chopped chocolate until melted.
Pour into a chilled bowl and refrigerate, stirring occasionally, until cold, about 2 hours.
Stir in cream and vanilla. Churn and freeze.

And just for kicks, here's an "American Style" (no egg or cooking) recipe for fresh strawberry ice cream.

Hull strawberries and blend with sugar into puree. Let sit for 10 minutes. Add sugar, salt, vanilla, milk, blend until smooth. Add cream, blend no more than 10 seconds. Churn and freeze.
##########
And now that it's nearly 10 p.m. and the outside air temp has plummeted to 80 degrees, I've opened the house, turned on the window fans, washed up my ice cream mess, and it's time to shower and hit the hay. Busy day tomorrow. Thank goodness!
##########
Be well and embrace the blessings of liberty.
Posted by PrairieAdventure at 10:00 PM